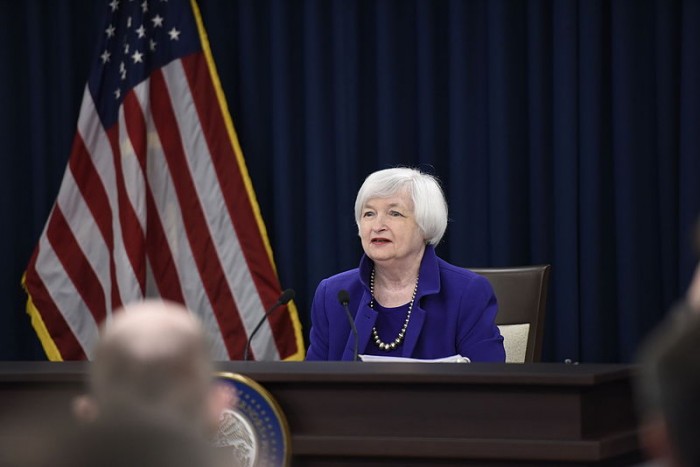 (BubbleOrNot) Federal Reserve Chairperson Janet Yellen was recently asked if she was comfortable with the Dow approaching 20,000.  She replied “Rates of return in the stock market relative to – remember that the level of interest rates is low – and taking that into account. I believe it’s fair to say that they remain within normal ranges.”

Janet Yellen is not the first person to claim that high stock market valuations are normal when interest rates are low.  In theory owners of stocks expect a risk premium over the risk-free rate available to holders of government bonds.  When the risk-free rate is itself zero, the yield on equities will be nothing more than the risk premium, and a low yield on equities translates into a high price earnings ratio.

Let’s take a look at this idea more closely.  First consider the high equity valuations as demonstrated by Robert Shiller’s Cyclically Adjusted PE Ratio.  This is the price of a stock divided by the average of the last ten years of inflation-adjusted earnings.  For the S&P 500, CAPE recently hit 28, a valuation only surpassed right before the 1929 crash and in the build-up to the dotcom crash.

It looks a little worrying, but it’s not a big deal because interest rates are low, right?

Here are some monthly interest rate data I downloaded from the Fed.

Following the logic of this theory, I decide to adjust (or “normalize”) the monthly CAPE values by multiplying them by historical interest rates.

Of course the country was dealing with the Great Depression and the Second World War during this period.  So one could argue that this is not a comparable period.

What if we examine the relationship between interest rates and CAPE for the full historical periods for which we have data?

Two things to note about these scatterplots.

All CAPE values above 30 occurred during the dotcom mania,

In both cases (AAA and T-Bills) there is a statistically significant negative linear relationship between CAPE and interest rates.  But the R-squared values are only 1% and 3%.  We must conclude that CAPE values are explained almost entirely by factors other than a low interest rate in the concurrent month.

No, I don’t think a CAPE of 28 is normal when interest rates are low.  I would describe a CAPE of 28 as abnormally high.  If you exclude the dotcom mania, 28 is extreme.  However, one must admit that a CAPE of 28 is to be expected at the tail end of eight years of TARP, TBTF, ZIRP, QE123, PPT, central bank coordination, and HFT.