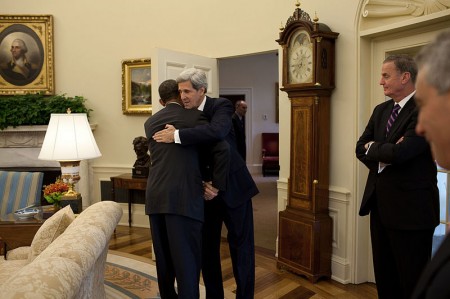 President Obama responded to the growing sectarian violence in Iraq by announcing Thursday that he’s dispatching Secretary of State John Kerry for talks in the Middle East and Europe — and is preparing to send up to 300 military advisers to aid the Iraqi military.

The president, holding back on more aggressive measures such as airstrikes, addressed the crisis in Iraq and the U.S. response after meeting for hours with his national security team. Speaking in the White House briefing room, he also touched on the controversial topic of whether the U.S. should work with Iran to counter militants next door — saying Iran can play a “constructive role” if they join the U.S. in calling for the Iraqi government to be inclusive, but would worsen the situation if the Shiite regime’s only interest is in shoring up fellow Shiite fighters.