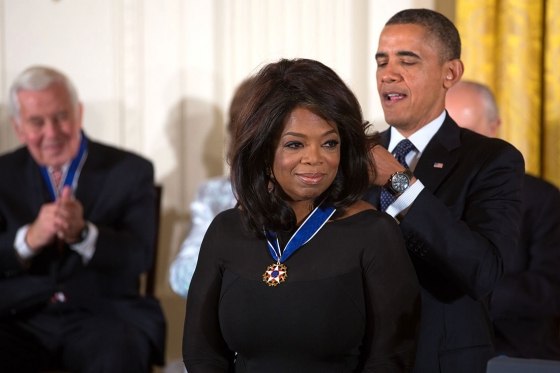 When Donald Trump originally announced that he was going to run for president, he said that his ideal choice for a running mate was Oprah Winfrey, but now he may be actually running against her in the 2020 election. A recent episode of The David Rubenstein Show that featured an interview with Oprah Winfrey is creating a tremendous amount of buzz that Oprah Winfrey may throw her hat into the ring during the next election cycle. This particular episode was taped back on December 12th, but it didn’t actually get aired on Bloomberg TV until last Tuesday. You can see the portion of the interview in which Oprah is asked about her presidential aspirations on YouTube right here, and as you can see, she definitely sounds like someone that is very seriously thinking about running…

Prior to this last election, Oprah says that she never even considered the possibility of running, but Donald Trump’s victory in November made her realize that maybe she could do it too. The following summary of the most important moments from the interview comes from Charisma News…

“I actually never thought—never considered the question, even the possibility,” she said while smiling coyly. “I just thought, ‘Oh. Oh.'”

“Because it’s clear you don’t need government experience to be elected president of the United States,” Rubenstein interjected.

“That’s what I thought,” she replied. “I thought, Oh gee, I don’t have the experience, I don’t know enough. Now I’m thinking, Oh. Oh.”

When Oprah made these statements, she had to know that they would create a firestorm.

And that is definitely what is happening. People are going absolutely crazy on Twitter at the thought that we could have “President Oprah” in 2020, and Matt Drudge is extremely enthusiastic about a Trump vs. Oprah race…

In a tweet sent Wednesday morning, the reclusive journalist who broke the Clinton-Monica Lewinsky scandal said such a race would be one for the ages.

“Trump vs Oprah would be the most epic race in American history. MAKE THIS HAPPEN…” Drudge tweeted to his nearly half a million followers.

And this is certainly not the first time that it has been suggested that Oprah should run for president. Just one week after the election, political activist Michael Moore mentioned her as a potential candidate…

Needless to say, Oprah would make a horrible president. Her political views are ultra-liberal, and she has no practical political experience whatsoever.

However, if she did run she would definitely be the front-runner for the Democratic nomination. At the moment, Joe Biden and Elizabeth Warren are considered to be the most likely opponents for Trump, and Oprah would almost certainly trounce either of them.

But will she actually do it? Oprah’s friend Gayle King is saying that it is not going to happen…

“I was in the audience that day and it was clearly a joke when she was playing with David because they have such a great rapport,” said Winfrey’s close pal and CBS This Morning co-host Gayle King early Thursday of a recent interview Oprah gave suggesting she was finally thinking of running for President. “But I also heard on the Oprah Winfrey show over the years you always have the right to change your mind but I would bet my first, second born and any unborn children to come, that ain’t never happening,” King emphatically added.

And hopefully it will not happen.

But the ironic thing is that the very first person that Donald Trump suggested as a potential running mate when he announced his candidacy in 2015 was Oprah Winfrey. The following comes from the New York Post…

After declaring his run for the White House Tuesday, Trump appeared on ABC and said Oprah Winfrey would complete his presidential dream ticket.

“I think Oprah would be great. I’d love to have Oprah,” Trump said. “I think we’d win easily, actually.”

I’ll bet you don’t remember that, do you?

And in his new book entitled “The Making of the President 2016“, Roger Stone reminds everyone that Trump actually floated the idea of Oprah as his running mate all the way back in 1999 during an interview with Larry King. The following is an excerpt from Roger Stone’s new book that was posted on Infowars…

Early in the interview, Trump dropped Bombshell Number One: “So I am going to form a presidential exploratory committee, I might as well announce that on your show, everyone else does, but I’ll be forming that and effective, I believe, tomorrow,” Trump told the crusty interviewer. “And we’ll see. I mean, we’re going to take a very good, strong look at it.”

And just minutes later, Larry went for it and asked him if he had a vice presidential candidate in mind. Trump hesitated briefly as if to ponder his answer and then stunned everyone including King – and no doubt Oprah herself. “Oprah. I love Oprah,” Trump said. “Oprah would always be my first choice. She’s a terrific woman. She is somebody that is very special. If she’d do it, she’d be fantastic. I mean, she’s popular, she’s brilliant, she’s a wonderful woman.” The following day the newspapers and TV news were filled with talk of Trump and Oprah.

I honestly don’t know what Trump was thinking, because Oprah Winfrey definitely does not belong in politics.

Even if Oprah does not run for president, Trump’s victory has a lot of other celebrities thinking that they could do the same thing that he did. Other big names that have been floated as potential candidates in 2020 include Mark Zuckerberg, Kanye West, Mark Cuban and Dwayne “The Rock” Johnson.

As you can see, we have entered a strange new era in American politics, and there is no telling what craziness we may see during the next election cycle.