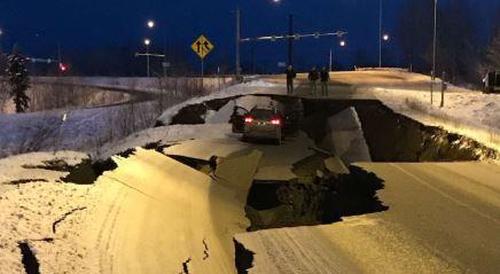 I live on the Kenai peninsula in Alaska. In March 2018, The Lord began to speak specific instructions to me over several months which I feel lead to share below. I have done these things as instructed. Note: self sufficiency here is difficult due to weather and the fact that at least 92% of the food calories consumed in Alaska are shipped in on 4 ships from Port of Tacoma in Washington state. Very little is grown here. This place is a recipe for famine.

-Anchor everything in the house that can tip over to the walls.

-Prepare to grow a large garden. No matter how big you make it, you will weep because the demand will be much more than the supply. ( I grew a garden and it was an unproductive mess. I have received instructions to study what went right and what went wrong, and study food preservation).

-Get a 1,000 gallon propane tank and get it filled and get the generators hooked up.

-Repair your Excursion (“Monster truck”). You are going to need it.

-Put away everything you don’t want to fall and be destroyed.

-Set up one of the generators to operate the oven and alternately, the clothes dryer.

On May 25, I was on my way to Anchorage to buy the solar panels. As I got to the back (south) end of Turnagain Arm at the inland end of Cook Inlet, I said to the Lord, “I just cannot get my head around the amount of energy that was released in the 9.2 intensity 1964 earthquake that caused thousands of acres of land to drop 10 feet in five minutes.” He replied, “The next one is going to be even worse. All of the infrastructure will be destroyed.” His voice was sad and somber. I had a flash revelation while he spoke that the intensity would be somewhat higher but their are twice as many people in Alaska now, which will make logistics much worse.

On February 12, 2019, I asked the Lord, “So when is this massive earthquake going to hit?” He said to me, “Imminent. Massive destruction. I am sending you back to work.” (I haven’t worked in years, partly due to a back injury that required 3 level fusion 2 1/2 years ago, taking a long time to heal).

This is a very serious call to repent and a warning that God’s righteous judgments will become more severe and more frequent throughout the USA without a true turning from sin. Prepare, people! Seek the Lord for confirmation and instructions!