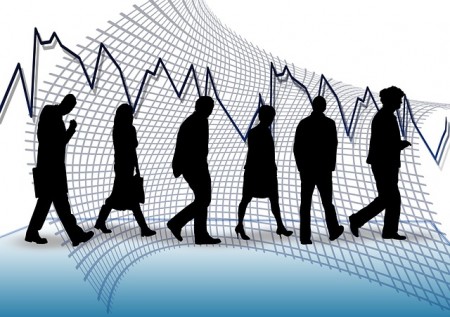 If you look back to the Great Depression of the 1930’s, reported unemployment levels were 20.6% on the low end and  24.9% on the high end, according to different economists at the time.

20.6% is considered to be the more accurate figure, as the 24.9% rate included people who had government jobs as being unemployed.

Following the Great Recession  that “supposedly” ended in 2009, we witnessed a large increase in those not in the labor force. In fact, 12 million people dropped out in just the past 5 years.

So how can the unemployment rate be 6%?

Over the Last 10 Years, 16 Million Americans
Dropped Out of the Workforce

12 million people have dropped out of the labor force within the last five years alone and 16 million in the last 10 years.

Yet, the official government statistics peg unemployment to be roughly 6%. How can that number be so low when there are so many people not working?

So how can the unemployment rate be so low?

Part of it has to do with how the government calculates the unemployment rate. As with the inflation rate, it is designed to make it appear there is less unemployment than there actually is.

According to the Bureau of Labor and Statistics, they explain who they count as being “unemployed”:

“People are classified as unemployed if they do not have a job, have actively looked for work in the prior 4 weeks, and are currently available for work.”

Much of the data is pulled from how many people have signed up for unemployment compensation, but anyone who has been unemployed for longer than 4 weeks or more, is no longer considered “unemployed” in the sense that they are used to calculate the unemployment rate statistic.

Part of the picture  has to do with an older population retiring, but that does not address the issue completely. As you can see in the pie chart, the lion’s share of the unemployed are under age 55.

In addition, the job situation for those working is dire. Many that do find work accept low wages that pale in comparison to what they once earned or can only find part-time jobs, which incidentally, count as a job in the government statistics.

A distinguishing characteristic of this recession is that many good paying jobs were lost and simply never returned.

The 2 largest groups of fastest growing occupations until 2022 are:

Both of these pay about $10 per hour.

12 million people have dropped out of the labor force within the last five years alone, during the so-called “recovery”
That is 3 times the rate of the previous 5 years.

in many respects the recovery has come from firms off-shoring jobs, cutting wages, slashing benefits, piling on more work – all factors that are decimating the middle class. This has done wonders with increasing profits for Wall Street, but 90% of stock wealth is controlled by 10% of the population.

Let’s compare today’s real unemployment rate with the highest calculated figure in 1933, at the height of the Great Depression, which was 24.9%. Let’s say it’s 25%, just to round off.

Today, with a total population of about 314 million,  there are 92 million people not working.
On it’s face, that is 29% of the population. Considering technical factors where there are people that can’t work, or are retired, the number is not too far off from the 23% of the real unemployed.

Number of People Not Working

Is this a recovery? Many Americans are suffering,
but the mainstream media continues to push
that we are in “recovery” mode

It depends on who you ask. If you have a massive stock portfolio then yes, you probably are doing well.

The reason so many Americans feel the economy is not doing well is because it isn’t. Many people on Wall Street thought things were great deep into the Great Depression of the 1930’s, just like the mainstream media now, but much of America was broke and living day-to-day.

So I’ll ask you. Are we in a recovery, or not?
Article authored by Carol Serpa. You can find the original story right here.