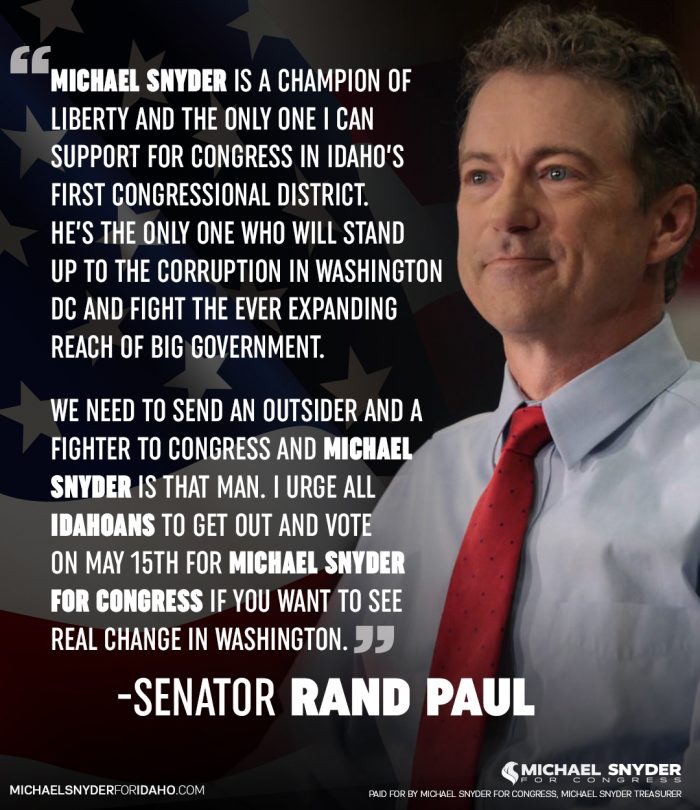 The leading voice for liberty in the United States Senate, Rand Paul, has officially endorsed our campaign. This is yet another game changing moment as our campaign continues to build momentum leading up to Election Day on May 15th. If you don’t know where to vote on May 15th, you can find out by entering your address right here. If you are not registered to vote yet, you can register at the polls on Election Day as long as you bring proof of Idaho residency with you. Make sure that they give you a Republican ballot, because that is the ballot that I am on. Anyone that is registered with another party (Democrat, Libertarian, etc.) will not be able to use a Republican ballot. Fortunately, the vast majority of Idahoans will be able to vote in the Republican primary, and thanks to our endorsement from Rand Paul a whole lot of people are buzzing about our campaign right now.

A copy of the endorsement has been posted on Rand Paul’s official Twitter page right here. If you have not seen it yet, the following is what Rand Paul had to say about our campaign…

Michael Snyder is a champion of liberty and the only one I can support for Congress in Idaho’s first congressional district. He’s the only one who will stand up to the corruption in Washington DC and fight the ever expanding reach of big government.

We need to send an outsider and a fighter to Congress and Michael Snyder is that man. I urge all Idahoans to get out and vote on May 15th for Michael Snyder for Congress if you want to see real change in Washington.

Rand Paul and his father Ron have both served this nation with distinction, and so it truly is a great honor to receive this endorsement.

Please help us get this endorsement out to as many people as possible on social media. You can find it posted on my Facebook page right here. Please like, share and spread this to as many voters as you possibly can.

If you are not that familiar with Senator Rand Paul, the following comes directly from his official U.S. Senate page…

U.S. Senator Rand Paul, M.D., is one of the nation’s leading advocates for liberty. Elected to the United States Senate in 2010, Dr. Paul has proven to be an outspoken champion for constitutional liberties and fiscal responsibility. As a fierce advocate against government overreach, Dr. Paul has fought tirelessly to return government to its limited, constitutional scope. As a hard-working and dedicated physician – not a career politician – Dr. Paul came to Washington to shake things up and to make a difference. Dr. Paul is a devoted husband and father of three that is currently living with his family in Bowling Green, Ky., where Dr. Paul owned his own ophthalmology practice and performed eye surgery for 18 years. Dr. Paul has been married for 25 years to Kelley Ashby Paul of Russellville, Ky., and they have three sons together: William, Duncan, and Robert.

On Friday we also learned that we have just been endorsed by ALIPAC.

That was another great honor, because ALIPAC is one of the leading voices on immigration issues in the entire country. The following information about ALIPAC comes from their official website…

1. Secure Our Borders.
2. Crack down on employers that intentionally hire illegals.
3. Remove incentives and rewards to illegals such as licenses, welfare, and other taxpayer benefits.
4. Enforce our existing laws and deport illegal aliens when convicted of crimes or detected during routine law enforcement activities.

We are so excited to have so many great patriots behind our campaign. Alex Jones, Mike Adams of Natural News, Senator Dan Foreman, Vote Team Trump and the largest Tea Party group on Facebook are all 100% behind us as well.

There are only four days left in the campaign, and we are doing all that we can to win this thing. Thanks to unprecedented intervention by Washington D.C. PACs, close to a million dollars has been spent promoting the campaign of one of my opponents. The Washington D.C. establishment is trying to buy this election, but we aren’t going to allow that to happen.

The PACs are running television commercials 24 hours a day in a desperate attempt to win this seat, but we are countering their air war with the best ground game of any of the seven campaigns. We have an absolutely amazing grassroots team that is hitting doors, making calls and pounding social media all over the district. It has been one of the great honors of my life to serve alongside the extraordinary people that God has brought into this campaign, and I have made so many new friends that I will have for the rest of my life.

Idaho’s first congressional district covers the western half of Idaho all the way from Boundary County in the north to Owyhee County in the south. We have put thousands upon thousands of miles on our vehicles as we have traveled across this enormous district over and over again, and I believe that we have held more townhalls than any of the other campaigns by a good margin.

I look forward to going to Washington and working with Rand Paul, Ted Cruz and other true conservatives in Congress to move this country in a fundamentally different direction. And of course our biggest ally will be President Trump, and we will be working as hard as we possibly can to implement the Make America Great Again agenda.

Once again, if you don’t know where to vote you can find your polling place right here. And please forward this email to as many people as you can. The key to winning this election is turning out the vote on Tuesday, and we are encouraging everyone “to get their 10”. Everyone has at least 10 family members, friends, neighbors, co-workers, etc. that they can personally contact and encourage to go vote.

It is expected that the voter turnout rate in this election will be around 20 percent, and if we do a really great job of getting our people to go vote we will win this thing.

Our Constitutional Republic is hanging by a thread, and we truly are at a crossroads. This is a battle for the future of our nation, and it is a battle that we cannot afford to lose.

As for me and my family, we choose to fight, and we are respectfully asking for your vote on May 15th.