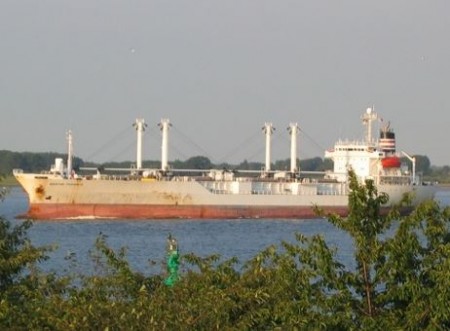 When a ship from an Ebola-plagued nation docks on American shores with a crew full of sick passengers, by all means, we should bring them into the country and treat them.

But don’t worry – the CDC figured it was probably fine.

According to a release from the CDC, the ship was reported to have traveled to a port in the Democratic Republic of the Congo and others in Africa. Officials immediately downplayed the likelihood that the sickness was related to an outbreak of Ebola in that part of the world.

“There is no evidence to suggest that the crew members traveled to, or had any contact with anyone from the remote island region of DRC where Ebola cases are occurring. Given this, the chance that the crew member could have Ebola is thought to be exceedingly low,” the CDC stated. (source)

Gee, that sounds like it’s no big deal. And, health professionals used safety precautions, and the only people there were from the CDC. Oh – and the hospital. And there were some guys from the Coast Guard. Also some “various government epidemiologists. They’ve got this handled.

“Our doctors and staff are ready and we have instituted full safety precautions in the unlikely event that this turns out to be something of concern,” said WJMC spokeswoman Taslin Alfonzo. “Everyone is using an abundance of caution until the patients can actually be assessed and appropriately diagnosed.”

Embedded in the hospital’s emergency room is the Region 1 disaster coordinator from the state, Alfonzo said.

Officials in New Orleans confirmed that the Centers for Disease Control and Prevention, the U.S. Coast Guard and various government epidemiologists were at the scene in Belle Chasse, where the vessel, identified as the Marine Phoenix, anchored near the Naval Air Station Joint Reserve Base. (source)

Besides, it turned out to be malaria, anyway. People just get so worried over nothing.

The crew member was taken to West Jefferson Medical Center for treatment. At least three more crew members, plus the river pilot who boarded the ship, were also expected to arrive at the hospital Wednesday night.

The crew member with malaria was listed in critical condition, Plaquemines Parish President Billy Nungesser said before the diagnosis was made.

Late Wednesday, officials told WDSU that another member of the crew — who had left the ship to seek treatment in the Bahamas — had died. That crew member was also diagnosed with malaria. (source)

Anyway, even if it had been Ebola, there’s nothing to get worked up over. The WDSU news guy said so.

“Even if a person on the ship was exposed to Ebola, once they are screened by medical personnel in New Orleans, they would not be able to go anywhere,” said WDSU Medical Editor Dr. Corey Hebert. “Even if they did get out, it has to be spread by direct bodily fluids.” (source)

So stop worrying. Our government has an iron grasp on the situation.  You just don’t understand the finer points of all this stuff. They may not be closing our borders. They may be knowingly bringing in people who could be infected. But they have your best interests at heart, and they’ll take care of you.

If you feel otherwise, you’re just one of those crazy preppers or anti-government conspiracy people. You probably even read articles about how to prepare for a pandemic.