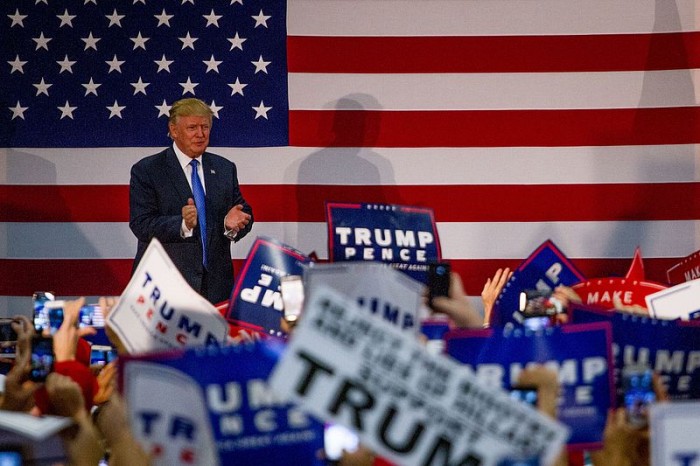 Donald Trump has all the momentum now. Will it be enough to propel him to victory on election day? Trump’s poll numbers were improving even before we learned that the FBI had renewed its investigation into Hillary Clinton’s emails, and the new survey results that came out over the weekend and on Monday make it clear that Clinton’s “certain victory” is not so certain after all. Unless something changes, Americans are going to go to the polls on November 8th with an FBI criminal investigation hanging over the Clinton campaign like an ominous cloud, and that is very good news for Trump.

The Clinton campaign was hoping that this renewed investigation would not “move the needle”, but unfortunately for them that appears not to be the case. Hillary’s unfavorable rating just hit an all-time high, a whopping 45 percent of all Americans believe that this scandal is “worse than Watergate”, and a Rasmussen survey has found that 40 percent of all undecided voters that are leaning toward voting for Hillary Clinton are still open to changing their minds before election day.

And even before this story broke on Friday, Clinton was having a difficult time getting her voters to the polls. According to the New York Times, early voting among young adults and African-American voters is significantly down compared to 2012, and those are demographic groups that Clinton desperately needs to turn out in large numbers.

But of course the key to winning the election is getting to 270 electoral votes, and poll numbers appear to be shifting in the key swing states that Trump and Clinton both desperately need. For a moment, I would like to examine what the numbers currently look like in some of the most important states…

Without Florida, Donald Trump has absolutely no chance of winning. This is something that even the Trump campaign has admitted. That is why it was so alarming that most of the polls in October had Hillary Clinton leading in the state.

Fortunately for Trump, a new survey that was conducted on Sunday shows him leading in Florida by four points.

Georgia wasn’t supposed to be a problem. Georgia has traditionally been a deep red state, but polling throughout this election season had shown a very tight race. This had Republicans deeply concerned and the Clinton camp very happy.

But now the momentum has seemingly shifted and the latest poll has Trump up by seven points.

Mitt Romney won North Carolina in 2012, and Donald Trump very much needs to win it if he hopes to be triumphant on November 8th. Hillary Clinton was shown to be leading in the eight most recent polls before the email story broke, but in the first major survey conducted afterwards she is now down by two points.

No Republican has ever won the presidency without Ohio, and Trump knows how important it is to his chances. The three most recent polls conducted before the FBI renewed the investigation into Hillary Clinton’s emails all showed a tie, but now the very first survey conducted afterwards shows Trump up by five points.

Hillary Clinton has consistently been in the lead in Colorado throughout this campaign, and most experts didn’t give Trump much of a chance in the state, but the latest survey shows that Clinton’s lead has been whittled down to just one point.

A survey that was conducted in mid-October showed Clinton having a five point lead in John McCain’s home state, but now the latest major poll has Trump up by two points.

One of the most important swing states out west is Nevada, and most surveys showed Hillary Clinton with a strong lead throughout the month of October. Unfortunately for her, a poll that was conducted on Sunday shows Donald Trump with a four point lead.

Clearly Trump has the momentum at this point, and it will be very interesting to see how the numbers change over the next few days.

And as we learn more about what is in these newly discovered emails, will her fellow Democrats stick with her? Already, some are publicly wavering. The following example comes from WND…

Schoen, a Fox News contributor, made the comments to host Harris Faulkner during a live television appearance Sunday night on “Fox Report Weekend.”

Public opinion is shifting quickly, but the bad news for Trump is that more than 23 million Americans have already voted. So millions upon millions of Americans cast their votes before they even learned of this new FBI investigation. If the race is very close, that could end up making the difference.

And of course the race could dramatically change once again if the FBI comes to some sort of resolution about these new emails prior to November 8th. On Monday, CNN reported that a resolution before election day did not appear to be likely…

FBI officials are unlikely to finish their review of new emails potentially related to its investigation into Hillary Clinton’s private server before the November 8 election.

The initial work of cataloging top Clinton aide Huma Abedin’s emails found on her estranged husband Anthony Weiner’s laptop could be done in the next few days, US law enforcement officials told CNN.

But the investigators are expected to spend more time doing other work, including likely working with other federal agencies to determine what — if any — classified materials are in the emails. This makes it unlikely there will be a resolution prior to the election.

However, late on Monday evening the Drudge Report reported that the L.A. Times has learned that investigators may have a “preliminary assessment” completed “in coming days”…

LA TIMES TUESDAY: FBI Investigators had planned to conduct new email review over several weeks. It now hopes to complete ‘preliminary assessment’ in coming days, but agency officials have not decided how, or whether, they will disclose results publicly… Developing…

Whether good or bad, I do believe that the American people deserve to hear something conclusive about these emails before November 8th.

If nothing is found to implicate Clinton, the American people should be told that.

And if evidence of very serious crimes is discovered, there is no way in the world that should be held back until after the election.

Even if it throws the election into complete and utter chaos, the American people deserve to know the truth.

But will we get it?

Stay tuned, because I think that this is going to be a crazy week.