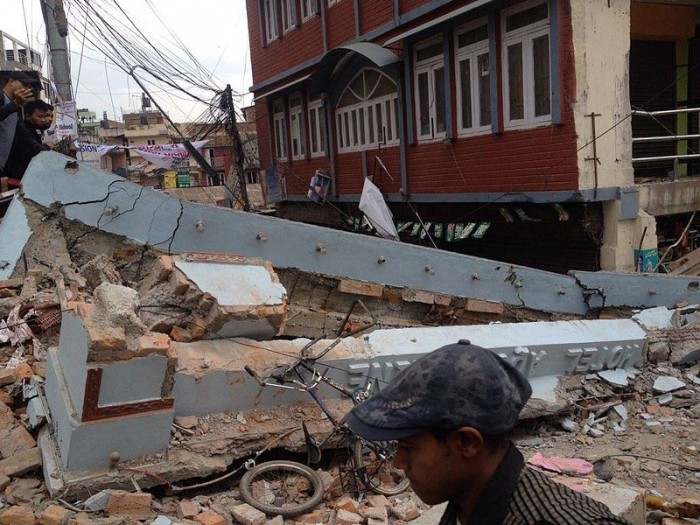 Just within the past few days, one of the most dangerous volcanoes in Chile erupted for the first time in 42 years and the nation of Nepal was hit by the worst earthquake that it has seen in 80 years. Even though the crust of the Earth seems to be shaking more violently than ever, most of the experts continue to assure us that what we are witnessing is “normal” behavior. But the cold, hard numbers tell a very different story. As I pointed out in a previous article, the number of volcanic eruptions that are happening right now is greater than the 20th century’s average for an entire year. Our planet appears to be getting more unstable, and that is not good news for any of us. In fact, it was recently reported that 150 million Americans live in areas that are prone to earthquakes. No matter how advanced our technology becomes, the truth is that we are still very much at the mercy of the forces of nature, and what just happened in Chile and in Nepal are clear reminders of this reality.

When Chile’s Calbuco volcano erupted a few days ago, it was the first time that it had happened in 42 years. Scientists tell us that it was “a surprise” and that there weren’t really any significant warning signs of any sort. It is now being projected that this volcano could erupt “for months“, and the ash that this giant volcano releases could have a substantial affect on climate patterns and agricultural production.

When Calbuco first erupted last week, it was quite a spectacular eruption. If you can believe it, the eruption actually sent ash 11 miles into the air…

Ash from the Chilean volcano Calbuco, which erupted without warning this week, reached as far as southern Brazil on Saturday and prompted some airlines to cancel flights to the capitals of Chile, Argentina and Uruguay.

Calbuco, considered one of the most dangerous along Chile’s chain of around 2,000 volcanoes, erupted twice in 24 hours on Wednesday and Thursday, sending up a spectacular 17-km-high (11-mile) cloud and coating nearby towns in a thick layer of gray ash.

But most of the world quickly forgot about that historic eruption because of the great tragedy that struck Nepal. The earthquake that rocked Nepal was the worst earthquake to hit that nation in 80 years. It was originally reported to be a magnitude 7.8 earthquake, which would be about 16 times more powerful than the horrifying 7.0 quake that destroyed so much of Haiti back in 2010. But now authorities are telling us that it was probably a magnitude 7.9 earthquake (which is about 40 percent more powerful than a 7.8 quake).

It would be hard to overstate the power of this extraordinary quake. According to CNN, a sizable portion of India actually slid underneath Nepal “in a matter of seconds”…

Saturday’s slip took place over an area about 1,000 to 2,000 square miles over a zone spanning the cities of Kathmandu and Pokhara in one direction, and almost the entire Himalaya mountain width in the other. A part of India slid about one to 10 feet northwards and underneath Nepal in a matter of seconds.

It is probably going to take weeks for authorities to understand the full scope of the devastation. We are being told that thousands are dead, but that is probably just the tip of the iceberg. In Kathmandu, dead bodies are being laid out in the streets and covered with white sheets…

Scarcely covered by white sheets, the bodies of those buried alive in their homes have been laid in the street. Overrun by the escalating disaster and in fear of any deadly aftershocks which could collapse yet more buildings, hospital staff have begun treating the wounded outside.

You can see some photographs of the earthquake damage right here. With each passing hour, more bodies are being pulled out of the rubble. Sometimes, rescuers find the living right next to the dead…

Weeping with relief, a survivor of the Nepalese earthquake is pulled from what remains of his ruined home after spending the night buried alive.

Among the debris which entombed him for 24 hours is a lifeless body, one of more than 2,500 across the Himalayas in the wake of the escalating disaster.

The corpse is that of the man’s friend – the last person he spoke to before disaster struck his home in Swyambhu in the Kathmandu Valley, Nepal. Cheek-to-cheek, they were both pulled from the rubble on Sunday, a day after the 7.8 earthquake wreaked havoc across Nepal.

But some of the worst damage will likely be in the remote villages.

As one aid worker in the region explained, sometimes earthquakes can cause rock slides that can bury entire villages…

“Villages like this are routinely affected by landslides, and it’s not uncommon for entire villages of 200, 300, up to 1,000 people to be completely buried by rock falls,” said Matt Darvas, a member of the aid group World Vision. “It will likely be helicopter access only.”

The people of Nepal deserve our prayers and our help. What they have been through is absolutely horrible.

Sadly, if the shaking of our planet continues to accelerate, this is only just the beginning of the tragedies.

For decades, things in the U.S. have been relatively calm. The only major volcanic eruption was Mt. St. Helens, and major earthquakes have been few and far between.

But just because things have been quiet for a very long time does not mean that they will continue to be. Scientists tell us that the west coast is overdue for a major quake, and a crippling megaquake could hit the New Madrid fault in the center of the country at any time.

Our way of life depends upon a stable planet, and that is what we have been blessed with most of the time over the years.

However, if things are now changing and volcanic eruptions and major earthquakes are going to become much more common, that changes everything.

So what do you think about all of this shaking that has been going on around the world?

And what do you think is causing it?