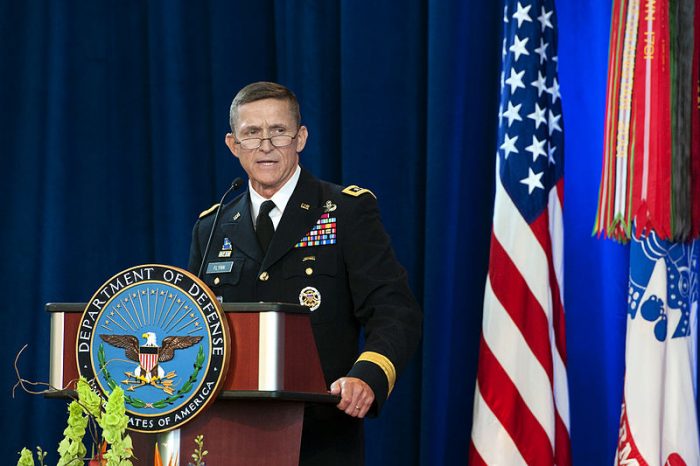 The resignation of General Flynn is part of an ongoing effort by the military-industrial complex to sabotage President Trump and re-assert control over foreign policy.

Flynn was backed into a corner after it was revealed that he had a conversation with Russian Ambassador Sergey Kislyak back in December. This was seized upon because it could be spun to validate the otherwise completely baseless conspiracy theory that Russia “hacked the election” to help Trump defeat Hillary Clinton and that Flynn’s talk with Kislyak was a promise of payback.

In reality, Flynn’s conversation with Kislyak was merely the excuse that establishment neo-cons and neo-libs from both parties were desperately searching for. They wanted him gone from the very beginning. This was a deep state coup.

In essence, Flynn was merely exercising due diligence as incoming National Security Adviser by communicating with a prominent foreign official. However, the politicized intelligence community and the breathless, hysterical anti-Trump press demanded Flynn’s head on the basis that he had violated the Logan Act, even though that contention is shaky at best.

The mainstream media’s sudden concern for Flynn having potentially violated the Logan Act is interesting given that establishment politicians have been violating the Logan Act for decades by physically meeting with foreign officials at Bilderberg conferences, without a whimper of dissent from the press.

As Chris Buskirk explains, when Democrats met with Russian officials, it was also treated as no big deal.

“Recall that in 1984 Senator Ted Kennedy approached the Soviet government about aid in defeating Ronald Reagan’s reelection. He offered them diplomatic and arms control concessions if they would help install Walter Mondale in the White House. Not surprisingly, Kennedy gets a pass if not a conspiratorial wink of assent from the guardians of democracy in the press. Naturally, they assume all partisans work with foreign governments to achieve their electoral aims.”

The real reason for Flynn being forced out is that he represented a direct threat to the military industrial complex that was swept aside by Trump’s victory.