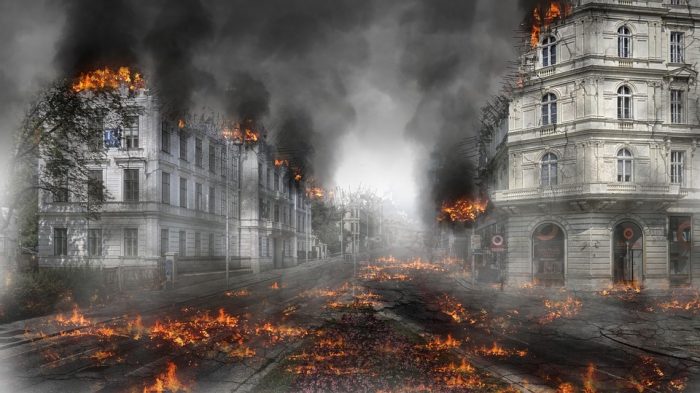 We are just inches away from the outbreak of World War III, and yet most Americans seem completely oblivious to what is happening. On Friday, North Korea conducted a missile test which proved that it now has the capability of hitting major U.S. cities in the western half of the country. Every diplomatic effort to end North Korea’s nuclear program has completely failed, the Chinese have shown that they do not intend to do much of anything to intervene in this crisis, and the United Nations is a dead end. Given enough time, the North Koreans will build hundreds of ICBMs capable of delivering nukes to cities all over America, and the Trump administration has already indicated that they will never accept this. If no other way can be found to derail North Korea’s nuclear program, President Trump will almost certainly order a military strike, and that could set off a war in which millions could die.

Personally, I am stunned that North Korea’s missile test on Friday didn’t receive more attention from the mainstream media, because the truth is that this was the biggest step toward war on the Korean peninsula since 1953…

After North Korea’s missile launch on Friday, the US-based Union of Concerned Scientists shared its fears that the country’s latest weapon had the capacity to reach major US cities.

When it launched the missile on Friday, North Korea aimed it on a high trajectory which allowed the weapon to crash in to the Sea of Japan.

The ground range of the test was 6,500 miles, according to multiple agencies, and it had a flight time of around 47 minutes.

If the missile had been fired at a standard trajectory, it could have easily reached Los Angeles, Denver or Chicago.

In other words, more than half the continental United States is now within range of North Korean missiles…

Preliminary data from the launch reveals that half, if not most, of the continental U.S. would be in range of the missile tested Friday.

“Looks like it pretty much can get to New York, Boston and probably falls just short of Washington,” David Wright, co-director and senior scientist for the Global Security Program at the Union of Concerned Scientists, told CNBC.

This is supposed to be a red line for President Trump, and it will be extremely interesting to see how he responds in the days ahead.

“Our foolish past leaders have allowed them to make hundreds of billions of dollars a year in trade, yet they do NOTHING for us with North Korea, just talk. We will no longer allow this to continue. China could easily solve this problem!”

In addition to Trump, UN Ambassador Nikki Haley is also indicating that time for diplomatic maneuvering has run out…

“The time for talk is over. The danger the North Korean regime poses to international peace is now clear to all.”

The Trump administration has already made it very clear that they will not be going to the UN Security Council with this matter because they believe that would be a dead end.

At this point, the available options for dealing with North Korea are narrowing rapidly, and direct military action appears to be gaining favor. In fact, General Terrence J. O’Shaughnessy released a statement on Saturday night warning that the U.S. is ready to use “rapid, lethal and overwhelming force”…

The U.S. and its allies are prepared to use “rapid, lethal and overwhelming force,” if necessary, against North Korea, the commander of the U.S. Pacific Air Forces warned Saturday night.

Earlier this month, the Trump administration announced that American citizens are now banned from traveling to North Korea. That is the kind of action that you would take just prior to a war.

But an attack on North Korea would not be easy. We don’t even know exactly how many nuclear weapons they actually have, and they are promising to start launching nukes if we choose to strike them…

“If the Yankees . . . dare brandish the nuclear stick on this land again . . . the DPRK will clearly teach them manners with the nuclear strategic force,” the spokesman said.

North Korea is honeycombed with underground tunnels and bunkers. There is no possible way that we could hit all of their nukes on a first strike, and if the North Koreans even get off a single nuke in response it is going to be an unprecedented disaster.

Could you imagine what would happen if a North Korean nuke hit Tokyo or Seoul?

Even one nuke could kill millions in those densely populated cities, and financial markets all over the world would almost instantly implode.

And North Korea also has some of the largest chemical and biological weapons stockpiles on the entire planet. Within moments of an attack, thousands of North Korean artillery pieces and rockets would start raining fire on Seoul, and even just a few chemical or biological warheads would cause immense devastation in that city of about 10 million people.

In addition, North Korean forces are poised to invade South Korea at literally any moment, and the only way that South Korea could survive such an invasion would be direct intervention by U.S. forces.

These are nightmare scenarios that most Americans never even consider, but they would be very real possibilities in the event that we go to war with North Korea.

I just don’t see how a direct military conflict with North Korea could possibly end well. For those that still doubt this, please consider the words of General Mark Milley…

“But we are at a point in time where tough choices will have to be made,” he continued. “We are going to have to make conscious decisions that are going to have significant consequences and I will just stop there. It’s not going to be a pretty picture — I can tell you that. It’s going to be very violent.“

A war with North Korea would be the most disastrous event for our planet since World War II, and it is something that we want to avoid at all costs.

Unfortunately, events are moving us in the direction of such a war very rapidly now, and it is very difficult to see how we are going to avoid such a scenario.