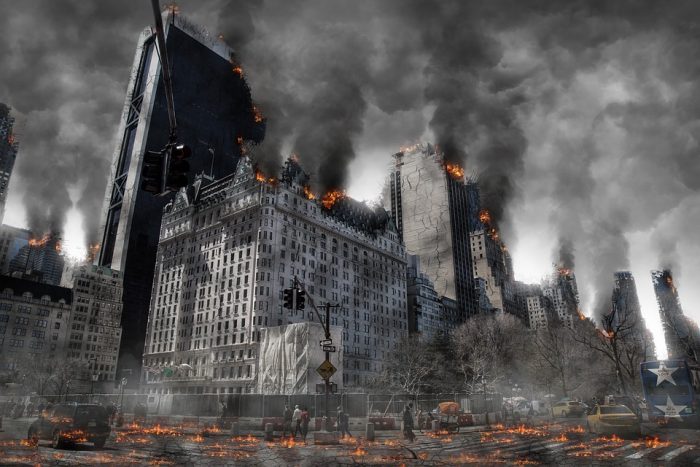 Are we on the verge of a nuclear war with North Korea? It has now been confirmed that North Korea has successfully created a miniaturized nuclear warhead, and last month they tested a missile that can reach at least half of the continental United States. Since 1994 the U.S. has been trying to stop North Korea’s nuclear program, and every effort to do so has completely failed. Last September, the North Koreans detonated a nuclear device that was estimated to be in the 20 to 30 kiloton range, and back in January President Trump pledged to stop the North Koreans before they would ever have the capability to deliver such a weapon to U.S. cities. But now the North Koreans have already achieved that goal, and they plan to ultimately create an entire fleet of ICBMs capable of hitting every city in America.

Right now, North Korea and the Trump administration are locked in a game of nuclear chicken. Kim Jong Un’s regime is never, ever, ever going to give up their nuclear weapons program, and so that means that either Donald Trump is going to have to back down, find another way to deal with North Korea, or use military force to eliminate their nuclear threat.

And time is quickly running out for Trump to make a decision, because now that North Korea has the ability to produce miniaturized nuclear warheads, the game has completely changed. The following comes from the Washington Post…

North Korea has successfully produced a miniaturized nuclear warhead that can fit inside its missiles, crossing a key threshold on the path to becoming a full-fledged nuclear power, U.S. intelligence officials have concluded in a confidential assessment.

The new analysis completed last month by the Defense Intelligence Agency comes on the heels of another intelligence assessment that sharply raises the official estimate for the total number of bombs in the communist country’s atomic arsenal. The U.S. calculated last month that up to 60 nuclear weapons are now controlled by North Korean leader Kim Jong Un. Some independent experts believe the number of bombs is much smaller.

The truth is that nobody actually knows how many nukes North Korea has at this point, and they are pumping out more all the time.

Yes, the Trump administration could order an absolutely devastating military strike on North Korea. But if the North Koreans even get off one nuke in response, it will be the greatest disaster for humanity since at least World War II.

But at this point Trump doesn’t sound like someone that intends to back down. In fact, on Tuesday he threatened North Korea with “fire and fury” if they keep threatening us…

“North Korea best not make any more threats to the United States,” Trump said from the clubhouse at his golf course in Bedminster, N.J. “He has been very threatening beyond a normal state, and as I said they will be met with the fire and fury and frankly power, the likes of which this world has never seen before.”

In response to Trump’s comments, the North Koreans threatened to hit Guam with a pre-emptive strike…

If Trump thought that his bluff would be sufficient to finally shut up North Korea, and put an end to Kim’s provocative behavior, well… bluff called because North Korea’s state-run KCNA news agency reported moments ago that not only did N.Korea escalate the tensions up another notch, but explicitly warned that it could carry out a “pre-emptive operation once the US shows signs of provocation”, and that it is “seriously considering a strategy to strike Guam with mid-to-long range missiles.”

Most Americans appear to be completely oblivious to the seriousness of this crisis. Once we hit North Korea, they will respond. A single nuke could potentially kill millions in Tokyo, Japan or Seoul, South Korea. And the North Koreans also have some of the largest chemical and biological weapons stockpiles on the entire planet. If things take a bad turn, we could see death and destruction on a scale that is absolutely unprecedented.

And if the North Koreans launch an invasion of South Korea, we will instantly be committed to a new Korean War and thousands upon thousands of our young men and women will be sent over there to fight and die.

There is no possible way that a military conflict with North Korea is going to end well. If things go badly, millions could die, and if things go really badly tens of millions of people could end up dead.

In an interview broadcast Saturday on MSNBC’s Hugh Hewitt Show, national security adviser H.R. McMaster said the prospect of a North Korea armed with nuclear-tipped ICBMs would be “intolerable, from the president’s perspective.”

“We have to provide all options . . . and that includes a military option,” he said.

Of course letting North Korea construct an entire fleet of ICBMs that could endanger the entire planet is not exactly a palatable option either. The Clinton, Bush and Obama administrations all kicked the can down the road year after year, and now we facing a nightmare problem that does not appear to have a good solution.

Unfortunately for Trump, time has now run out and a decision has to be made…

“Today is the day that we can definitely say North Korea is a nuclear power,” Harry Kazianis, director of defense studies at the Center for the National Interest, told USA TODAY. “There is no more time to stick our heads in the sand and think we have months or years to confront this challenge.”

Let us pray that a way can be found to derail North Korea’s nuclear program that does not involve us going to war.

Because the moment that U.S. forces start striking North Korea, the North Koreans could literally unleash hell if they are inclined to do so.

It appears that we are now closer to nuclear war than we have been at any point since the Cuban missile crisis. A nuclear holocaust was avoided back then, and hopefully a way will be found to avoid one now.

2 thoughts on “This Is The Closest That The U.S. Has Been To Nuclear War Since The Cuban Missile Crisis”