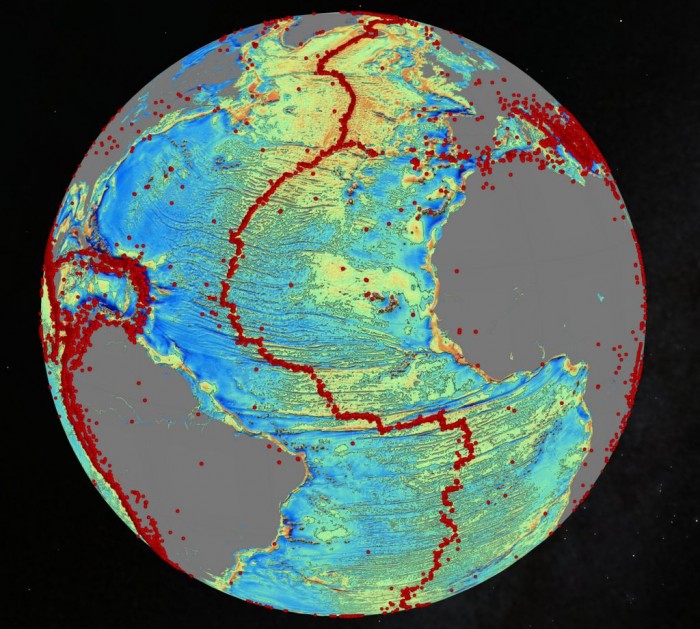 Scientists have created the highest resolution map yet of the ocean floor, revealing thousands of underwater mountains and extinct volcanoes that were previously unknown. In a study published Thursday in Science, researchers say the new map is at least twice as accurate as the previous version assembled nearly 20 years ago even though it can only resolve features that are a mile high and bigger. “You might think, that’s not so much better, but instead of seeing 5,000 old volcanoes down there, now we can see 10,000,” said David Sandwell, a geophysics professor at the Scripps Institution of Oceanography at UC San Diego who led the study. Scientists know remarkably little about the deep-sea floor. Sandwell thinks of it almost as a separate planet in our solar system that we have only begun to explore. “We have maps of Mars that have 100 to 10,000 times more resolution than maps of the deep ocean,” he said.

To create the new map, the researchers used data collected by two satellite observatories: the European Space Agency’s CryoSat-2, and the Jason-1, operated by NASA and the French space agency CNES. Both spacecraft have instruments that can measure the topography of the ocean surface within a fraction of an inch. Large mountains and volcanoes on the ocean floor affect the height of the water at the ocean’s surface, so measuring the surface can give a good idea of what is going on below. “You have to go through a bit of math and physics to get there, but, for example, a 1.2-mile-high volcano will produce a very low amplitude bump on the ocean surface of about 10 centimeters over 12.5 miles,” Sandwell said. “This is how we are measuring what is on the bottom.”In the Science study, the researchers noted two of the most obvious features that the higher resolution map allowed them to see: a previously hidden ridge in the South Atlantic that is almost 500 miles long, and another ridge in the Gulf of Mexico that is as wide as Texas.