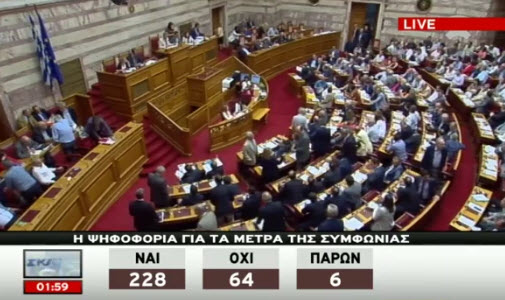 Greek lawmakers passed a bailout agreement that keeps the country in the euro for now, shifting attention to the European Central Bank as it weighs whether to pump more money into the country’s hobbled financial system.

After more than four hours of debate stretching into the early hours of Thursday, 229 members of the 300-seat parliament in Athens approved new austerity measures that are a precondition of as much as 86 billion euros ($94 billion) in aid. Among those who opposed the bill were 32 members of Prime Minister Alexis Tsipras’s Coalition of the Radical Left, or Syriza, a sign the premier may have lost his majority.