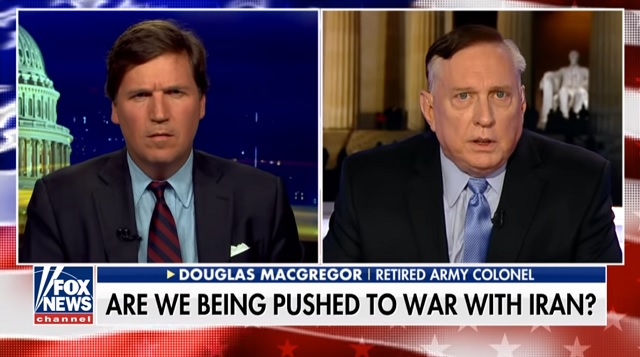 (Information Liberation) Fox News host Tucker Carlson and Colonel Douglas Macgregor spoke out Tuesday against the prospect of a US war with Iran and warned President Trump a “Gulf of Tonkin incident” could be staged to drag the US into it.

Carlson said the main agitators pushing for war are the same neocons who fought Donald Trump every step of the way during his presidential campaign. He mocked their idea Iran is the “greatest threat” America faces, saying: “Virtually every attack in America has been inspired not by Iran, but by Iran’s Sunni enemies.”

Carlson said the neocons working to push America into a war “regard the notion of putting America first as morally offensive.”

“They are fully on Bill Kristol’s team,” Carlson said. “In fact, just last week Kristol was encouraging Nikki Haley to challenge her boss Donald Trump for the Republican nomination two years from now.”

“In a way that makes sense,” Carlson said. “If there was ever a swamp in Washington you are looking at it — the foreign policy establishment — they are working overtime to ensnare the president in a mess in Iran. Let’s hope that he understands exactly what’s going on.”

Col. Douglas Macgregor said he thinks Trump won’t get snookered into war with Iran despite being surrounded by war hawks because Trump tends not to “listen to his advisers.”

Nonetheless, Col. Macgregor said Presidnet Trump should be on the lookout for a “Gulf of Tonkin incident” staged to drag the US into war.