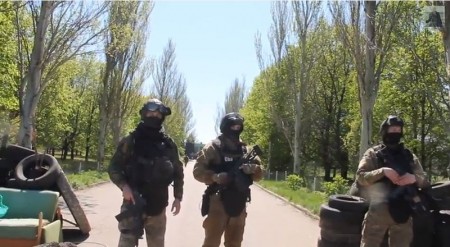 As government forces sought to crush an insurgency in eastern Ukraine Wednesday, the country’s foreign minister agreed to a second cease-fire after four-way talks that included Russia, according to German Foreign Minister Frank-Walter Steinmeier.

The report, by Russia-owned news site RT.com, comes as Ukrainian government and media sources reported that five Ukrainian troops and hundreds of separatists were killed as government forces engaged in more than 100 clashes with pro-Russia forces in the country’s east. The government’s new offensive comes a day after Ukrainian President Petro Poroshenko ended a 10-day cease-fire Tuesday after insurgents failed to meet his demand that they disarm.

Foreign ministers from Ukraine, Russia, Germany and France gathered in Berlin to discuss the worsening crisis. In a joint statement, the ministers announced a plan to meet by Saturday “with the goal of reaching an unconditional and mutually agreed sustainable cease-fire.”