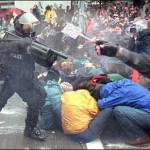 According to the Department of Defense, the U.S. military plans to “assist” civilian authorities in the event of a significant outbreak of the H1N1 virus this fall.

The WHO is recommending mandatory swine flu vaccinations be administered in almost 200 different countries.

Swine flu vaccine makers apparently plan to rely on a U.S. emergency declaration to use experimental additives made by GlaxoSmithKline and Novartis in their swine flu vaccines that many health experts are describing as potentially very dangerous.

On Thursday, the Temple Institute will actually begin building the sacrificial altar that they hope will be used in a rebuilt Temple in the future.

Is the Federal Reserve actually paying banks NOT to make loans to struggling Americans?

If running for office is not on Hillary Clinton’s “radar”, then why does she have eight paid campaign staffers and a war chest of 3 million dollars stored up?

According to one new study, 42 percent of the youth in Russia report having tried to commit suicide.

Have traces of the Aramaic language been found on the Shroud of Turin?

White supremacist radio host Hal Turner has admitted in court that he was an FBI informant.

Soldiers back from Iraq are telling horror stories about how American soldiers regularly shot Iraqi civilians for no reason, and how some Iraqis were dropped off bridges after interrogations.

Authorities are searching for a cold-hearted killer who murdered an 8 month pregnant Massachusetts mom, cut her uterus open and took her nearly full-term baby girl.

Lastly, In an attempt to send away as many families that need assistance as possible, New York City is actually buying one-way tickets for homeless families to get them out of their area.  In one case, they even sent a homeless family to Paris, France.