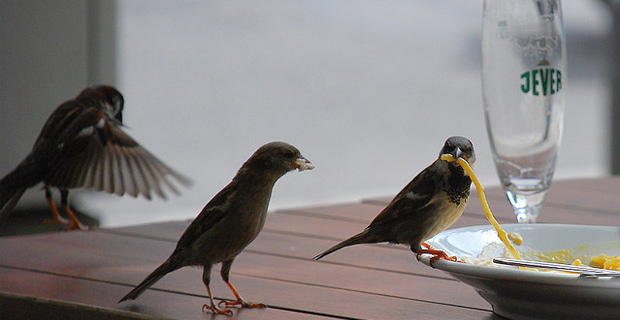 Thursday morning, residents in Boston witnessed a bizarre and disturbing event that sounds like something out of a Hitchcock movie: 47 dead birds fell from the sky over their neighborhood for no obvious reason.

And it wasn’t just dead birds…

Investigators are working to determine the cause, and whether the deaths of two cats in the neighborhood could be related. A third cat was also affected, reports necn.com.

Willien Pugh, 67, a long-time resident of the Dorchester, was the first to call animal services.

She told the Boston Herald that she found her cat, Sally B, clinging to life on the back porch as the birds fell from the sky.

“My sister fed her. Then like at 8:30 she came to the door and told me Sally was laying there at the back door, and that was it. Nobody knows who did it or nothing.”

“I don’t know if she was playing with the birds. I’d seen them on the ground, on the fire escape, in the back yard.”

Pugh described the birds as “lethargic, trying to roll over, not able to stand up or fly.”

“I tried to move them a little bit, and it just seemed like they were on one side, and you put them on their feet and they just fell,” Dorchester resident Shelora Levaud told CBS Boston. “It was almost like one side was paralyzed.”

Lt. Alan Borgal with the Animal Rescue League of Boston described what he saw to The Boston Herald:

“These birds were literally falling out of the trees and the fences and stuff. We were just catching them so they didn’t hit the ground. It was all around this complex here. And we’ve seen a lot of small birds and they seem fine. It’s all grackles.”

Grackles are black songbirds that typically travel in large flocks.

“When I arrived, birds would fly, like from a house to a tree, they would flop in the tree and they would fall to the ground,” Borgal told necn. “The weaker ones were just falling right out the sky.”

The cause is a complete mystery…

Borgal said that no one in the area was permitted to have poisons. The cause of the deaths remains a mystery. He said a vet will examine Pugh’s cat, and the USDA will inspect some of the birds.

“The cat is an indoor-outdoor cat, so if it picked up a bird…” Borgal said. “All we know is this is some sort of environmental event. We don’t know if it’s disease-driven. We don’t know if somebody put out too much poison.”

The Animal Rescue League of Boston said that 32 of these birds died, either at the scene or afterwards as rescuers attempted to tend to them. The remaining 15 birds are in “good condition” and will be sent to Tufts Wildlife Center in Grafton, Massachusetts.

City officials are looking at everything from a virus, to environmental poisoning, to something intentional. They’re also studying the many feeders neighborhood residents have outside.

Just a few weeks ago, millions of bees died after aerial spraying for sprays for Zika mosquitoes was conducted in Dorchester County, South Carolina. The chemical used, Naled, is highly-to-moderately toxic to birds.

Mosquito spraying is conducted in Boston “as needed during the summer and early fall” according to the Boston Public Health Commission, which also reports that mosquitoes that tested positive for West Nile Virus were found in many regions of Boston in August.

Another thing to watch is any possibility of an Avian flu – just recently, person-to-person transmission of the H7N9 virus was confirmed in China.