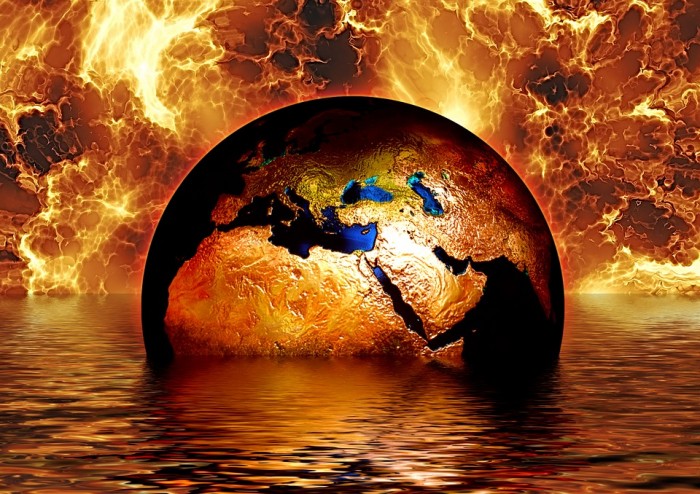 All over the planet, global weather patterns have gone completely nuts. Just over the past few days we have seen “life threatening” heatwaves, extremely dangerous wildfires, vicious tornadoes and unprecedented flooding – and that is just in the United States. And of course this is just the continuation of a trend that stretches back to last year, when extremely weird weather created “apocalyptic-like conditions” in many areas around the world. So why is this happening? For decades, we could count on weather patterns falling within fairly predictable parameters, but now that is completely changing all of a sudden. All over the globe we are seeing things happen that we have never seen happen before, and the weather just seems to get even more crazy with each passing month.

Just consider what has been going on the past few days. Let’s start with the “life threatening” heatwave that is currently hammering the west coast…

The West Coast is in the grip of a ‘life threatening’ triple-digit heatwave that is set to continue well into next week, raising the risk of wildfires.

From Oregon to Nevada temperatures are set to top 100F tomorrow and into Monday, with Phoenix, Arizona, predicted to top out at 116F.

These are temperatures that you might expect to see in July or August, but right now summer has not even officially begun yet.

And as the article quoted above noted, these extremely high temperatures bring with them a much higher risk of wildfires. In fact, firefighters in southern California are currently fighting a horrible fire that is raging wildly out of control and that has already forced thousands of people (including Kim Kardashian and Kanye West) out of their homes…

“This is a fast-moving, dangerous fire,” Los Angeles County Fire Chief Dennis Cross said. “It’s hard for people to see where this fire is because of the dense canopy and the canyons.”

If you follow my work closely, you already know that 2015 was the worst year for wildfires in all of U.S. history.

More acres burned in the U.S. last year than we had ever seen before.

And so far this year, we are more than a million acres ahead of the pace set last year.

Meanwhile, CNN is reporting that this “is the second year in a row that Texas has been hit by 500-year floods“…

In a recent article, I noted that the United States has now been hit by 10 major flooding events since the end of last September.

Never before in U.S. history have we ever seen so many major floods in such a compressed period of time.

And the hits just keep on coming. On Sunday, the east coast was bracing for a series of storms which appeared poised to produce very high winds, severe thunderstorms and even possibly some tornadoes. The following comes from the Daily Mail…

The East Coast is braced for an incoming storm that could see up to seventeen million people hit with tropical rain, thunderstorms and even tornadoes.

People from New York through North Carolina could be affected, as thunderstorms were expected to blast winds up to 55 miles per hour later on Sunday.

The Governors Ball in New York City was cancelled for safety reasons after organizers saw the forecast for lightning.

And on top of everything else, Florida is about to be hit by tropical storm Colin.

But don’t worry, because all of this is perfectly “normal”, right?

Across the Atlantic, Europe is also dealing with some extremely crazy weather. Major flooding is being reported all over the continent, and the French just experienced their wettest month since 1886…

Segments of France’s border with Belgium received six-week’s worth of rain in under 24 hours earlier this week, causing widespread flooding across the country. May has been the country’s rainiest month since 1886, Radio France Internationale says.

As a result of that rain, French meteorologists expect the already-swollen Seine in Paris to peak at 6.5 meters (21 feet) above its usual level on Friday. The Louvre is closed due to flooding concerns, and workers have been busy moving priceless works of art as a precautionary measure.

On the other side of the planet, many areas of India have been dealing with an unprecedented heatwave. On Thursday, May 19th, the all-time record for the highest temperature ever recorded in India was broken. And this was part of a crippling heatwave that pushed temperatures in northern India “above 104 degrees for weeks”…

A severe heat wave warning is in place for much of India through Saturday. Temperatures in northern India have risen above 104 degrees for weeks, the BBC reported. The weather has killed hundreds of people and destroyed crops in more than 13 states, the Associated Press reported.

If this happened where you live, you could just go inside and turn on the air conditioning.

But most of those people do not have air conditioning, and that is why hundreds of them have been dying.

At the exact same time when the crust of our planet is becoming increasingly unstable, our weather is starting to become really crazy too.

But what is truly frightening to consider is this…

What if our weather just keeps getting crazier and crazier?

If our weather continues to spiral out of control, it is inevitable that there will be major famines, widespread riots and tremendous political unrest all over the planet.

Is our world equipped to be able to handle seven billion people going absolutely nuts all at once?

Let us hope and pray for weather patterns to begin to return to normal, because I don’t think that we are.