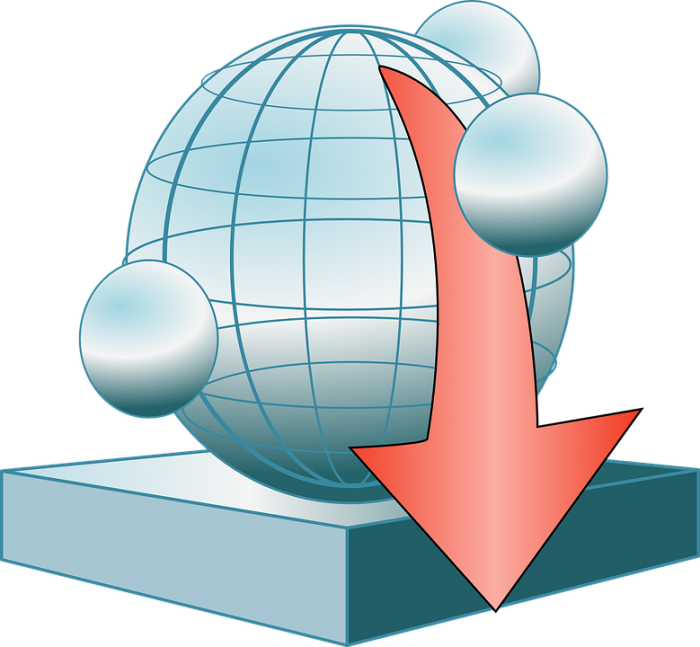 We just got more evidence that global trade is absolutely imploding. Chinese exports dropped 25.4 percent during the month of February compared to a year ago, and Chinese imports fell 13.8 percent compared to a year ago. For Chinese exports, that was the worst decline that we have seen since 2009, and Chinese imports have now fallen for 16 months in a row on a year over year basis. The last time we saw numbers like this, we were in the depths of the worst economic downturn since the Great Depression of the 1930s. China accounts for more global trade than any other nation (including the United States), and so this is a major red flag. Anyone that is saying that the global economy is in “good shape” is clearly not paying attention.

If someone would have told me a year ago that Chinese exports would be 25 percent lower next February, I would not have believed it. This is not just a slowdown – this is a historic implosion. The following comes from Zero Hedge…

Things are not getting better in China as Exports crashed 25.4% YoY (the 3rd largest drop in history), almost double the 14.5% expectation and Imports tumbled 13.8%, the 16th month of YoY decline – the longest ever. Altogether this sent the trade surplus down to $32.6bn (missing expectations of $51bn) to 11-month lows. 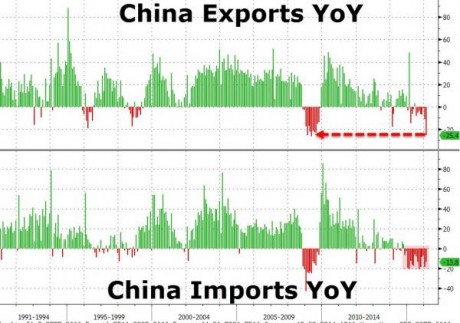 So much for that whole “devalue yourself to export growth” idea…

I don’t know how anyone can possibly dismiss the importance of these numbers. As you can see, this is not just a one month aberration. Chinese trade numbers have been declining for months, and that decline appears to be accelerating.

Another very interesting piece of news that has come out in recent days regards the massive layoffs that are coming at state industries in China. According to Reuters, five to six million Chinese workers are going to be losing their jobs during this transition…

China’s leadership, obsessed with maintaining stability and making sure redundancies do not lead to unrest, will spend nearly 150 billion yuan ($23 billion) to cover layoffs in just the coal and steel sectors in the next 2-3 years.

For years, the Chinese economic miracle has been fueling global economic growth, but now things are changing dramatically.

Another factor that we should discuss is the fact that the relationship between the United States and China is going downhill very rapidly. This is something that I wrote about yesterday. China has seized control of several very important islands in the South China Sea, and in response the Obama administration has been sailing military vessels past the islands in a threatening manner. Most recently, Obama decided to have an aircraft carrier task force cruise past the islands, and this provoked a very angry response from the Chinese…

The four-ship U.S. strike group that patrolled the disputed South China Sea was followed by Chinese warships, a show of force that prompted a hard-line response from China doubling down on its claim to nearly all of the resource-rich sea.

China’s foreign minister said his country’s sovereignty claims are supported by history and made a veiled reference to the 5-day patrol by the Stennis Carrier Strike Group, as well as recent passes by China’s man-made islands by destroyers Lassen and Curtis Wilbur in recent months.

“The South China Sea has been subject to colonial invasion and illegal occupation and now some people are trying to stir up waves, while some others are showing off forces,” Wang Yi said, according to an Associated Press report, a day after the Stennis CSG departed the South China Sea. “However, like the tide that comes and goes, none of these attempts will have any impact. History will prove who is merely the guest and who is the real host.”

Most Americans are not even paying attention to this dispute, but in China there is talk of war. The Chinese are absolutely not going to back down, and it does not look like Obama is going to either. Needless to say, a souring of the relationship between the largest economy on the planet and the second largest economy on the planet would not be a good thing for the global economy.

And of course China is far from the only country that is having economic problems. Yesterday, I discussed how Italy’s banking system is on the verge of completely collapse. A few days before that I discussed the economic depression that has gripped much of South America. A new global economic crisis has already begun, and just because the United States is feeling less pain than the rest of the world so far does not mean that everything is going to be okay.

There are huge red flags in Europe, Asia and South America right now. In addition, our neighbor to the north (Canada) is experiencing a very significant slowdown. The irrational optimists can continue to believe that the U.S. economy will somehow escape relatively unscathed if they would like, but that is not going to be what happens.

Just like virtually everyone else on the planet, we are heading into hard times too, and this is going to become a dominant theme in the presidential campaign as we move forward into the months ahead.