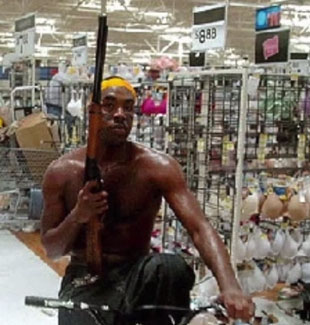 Rioting, looting, burning down stores and shooting police officers – is this about to become the “new normal” in America? What we just witnessed happen in the streets of Ferguson, Missouri is a prime example of how quickly the streets of America can descend into chaos. There is so much anger and frustration in this country, especially among our young people, that all it takes is a “trigger event” to spark a wildfire. In this case, it was the shooting of an unarmed black teen by a police officer. According to the police, 18-year-old Michael Brown got into a physical altercation with an officer and was subsequently shot. Word spread quickly throughout the community, and protests were rapidly organized. But the protests didn’t stay peaceful. People started chanting “kill the police” and throwing rocks and bottles. Store windows were smashed, the looting began, and people went absolutely crazy. And it wasn’t just a few people that were doing the looting. Huge mobs of people looted stores all over Ferguson. At one point an ATM was even dragged out of a QuikTrip gas station and a while after that the store was set on fire. But this is what happens when things descend into chaos. The owners of those stores didn’t have anything to do with the shooting of Michael Brown, but the violence got directed at them anyway. And someday when we see similar scenes erupt in major cities all over the nation, it won’t matter what your political beliefs are. You just better not be in the wrong place at the wrong time.

Ferguson is a little town just outside of St. Louis with a population of about 21,000 people. You wouldn’t think that it would be possible to see such massive rioting in such a small community. But that is precisely what happened. On Monday, millions of Americans were absolutely mesmerized by the images coming out of Ferguson. The following is how one news source described what happened…

Schellman said a St. Louis County officer injured his knee while at a Foot Locker store during the rioting. He said another officer was injured when he had a brick thrown at him.

Throughout the evening, numerous cop cars sustained damage and Ferguson Police Chief Tom Jackson said someone in a yellow pickup truck fired shots at officers while circling a WalMart parking lot. Chief Jackson said he got into a cop car to give chase to the truck but the truck got away.

Police said shots were also fired at a police helicopter in the area.

But words do not really accurately convey the level of craziness that was unleashed. I would encourage you to watch some of the videos on YouTube of the rioting and looting that were going on in Ferguson. The video posted below is just one example…

DeAndre Smith, 30, of Ferguson was happy to justify the looting when a reporter asked him about it Monday morning.

“This is exactly what is supposed to be happening when an injustice is happening in your community,” he said, adding: “You have kids getting killed for nothing.”

Smith, who moved to St. Louis from New York in December, said there could be more to come.

“I don’t think it’s over honestly,” he said. “I just think they got a taste of what fighting back means.”

Of course this is not the first time that we have seen this kind of thing happen. Earlier this year, all it took was a snow storm for people in Atlanta to start behaving like crazed lunatics. And late last year we saw rioting and looting all over the nation when a technical glitch caused the EBT system to go down for a short while.

Even though the economy has somewhat stabilized (at least for the moment), levels of anger and frustration have continued to grow in this country. We have been taught to hate one another and to blame one another for our problems, and so now the U.S. is more divided than at any other point in recent memory. For much more on this, please see my previous article entitled “America The Divided: Everyone Knows We Have Problems But There Is Very Little Agreement On Solutions“.

We live at a time when things are so tense that even a small spark can light an absolutely huge fire. America has become a tinderbox. Next time it might not be a racially-charged shooting. Next time it might be an Ebola outbreak that sparks looting and panic. Or it might be some sort of financial collapse. We just don’t know.

But what we do know is that there are lots and lots of people that are willing to riot and loot and commit unspeakable crimes given the right circumstances.

Decades of social decay have gotten us to the point where the thin veneer of civilization that we all take for granted every single day is wearing dangerously thin.

The truth is that it is not going to take much to push this nation over the edge.

If this kind of rioting can take place in a community with just over 20,000 people, what would a full-blown riot look like in a city with millions of people?

That is a very sobering thing to think about.

Once upon a time in America, you could leave your doors unlocked at night and you could let your kids play in the streets without ever having to worry.

But now we are a sick, decaying nation that has millions of people ready to riot and loot at the drop of a hat.

Is there any hope for us?