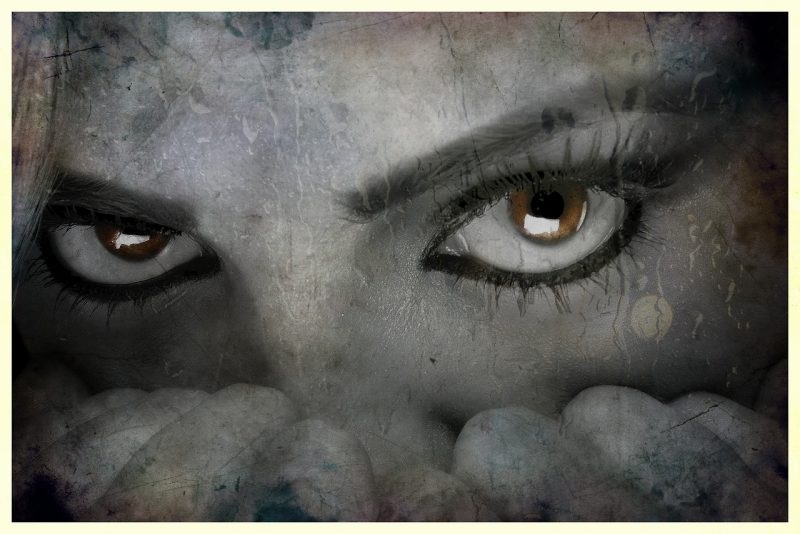 In this article, I am going to share some things with you that defy “rational explanation”.  As our society has become increasingly obsessed with the occult, experts that deal with cases of demonic possession report that they have seen a huge surge in demand in recent years.  Many of those that reach out for help are absolutely desperate, because often the torment caused by the demons is almost unbearable.  Unfortunately, the movies, television shows, books and video games that draw so many of our young people to the world of the occult just keep getting even darker and even more “realistic”.  So it is quite likely that the surge in demonic activity in our society will only continue to escalate.

Of course a lot of people out there never spend too much time thinking about such things because they cannot see into that realm.

But once in a while, all of us have the opportunity to get a glimpse into what is happening on the other side.

For example, a grandmother named Tory McKenzie recently set up a motion-activated camera to try to determine what was causing her tw0-year-old granddaughter so much distress during the night.

It turns out that the camera did capture an image of what her two-year-old granddaughter was seeing, and when she saw what it was Tory McKenzie completely freaked out…

Tory McKenzie set up a motion-activated camera at her son’s house after complaints his two-year-old daughter Amber McKenzie was talking to something unseen in the middle of the night.

The 41-year-old checked her camera’s app four days later to find a bone-chilling image of a figure standing inches away from the sleeping tot and her seven-month-old brother Michael McKenzie, with ‘a horn on its head and long claws’.

You can see a photo of the creature right here.  In a desperate attempt to get it to leave, Tory McKenzie started “burning oils”, but that only stirred up the creature even more…

When she tried to rid the house, which was hers but is now owned by her son, of the ‘evil presence’ by burning oils, she claims cabinets and curtains opened and closed and music began to play by itself.

These things are very real, and as incidents become increasingly common throughout our society even the mainstream media is starting to pay attention.

In fact, a few years ago the Washington Post actually featured a guest article by a psychiatrist about his experiences with demonic possession…

Assaults upon individuals are classified either as “demonic possessions” or as the slightly more common but less intense attacks usually called “oppressions.” A possessed individual may suddenly, in a type of trance, voice statements of astonishing venom and contempt for religion, while understanding and speaking various foreign languages previously unknown to them. The subject might also exhibit enormous strength or even the extraordinarily rare phenomenon of levitation. (I have not witnessed a levitation myself, but half a dozen people I work with vow that they’ve seen it in the course of their exorcisms.) He or she might demonstrate “hidden knowledge” of all sorts of things — like how a stranger’s loved ones died, what secret sins she has committed, even where people are at a given moment. These are skills that cannot be explained except by special psychic or preternatural ability.

Of course many others have reported witnessing similar things.  Just consider this quote from a Catholic priest named Vince Lampert…

“I’ve seen levitation, eyes rolled to the back of the head, foaming at the mouth, people falling on the floor and slither like a snake across the ground,” Lampert said. “Speaking languages otherwise unknown to an individual, exhibiting superhuman strength.”

What would you do if you suddenly saw someone levitate or start slithering around on the ground like a snake as they speak in Latin?

He said drugs, ouija boards and a whole host of dark materials on the internet can open you up to dark spirits.

“As the years go by, the cases are getting darker.”

This is just one of the reasons why I encourage my readers to be very careful about what “entertainment” they bring into their homes.

As a teenager, Jenny Weaver was fascinated by the witchcraft that she saw practiced in a popular movie, and pretty soon she was deeply immersed in the occult…

Feeling powerless and unloved, Jenny started cutting and smoking pot. Then she saw a movie about teen witches that showed her a way to take charge of her life. Soon, she was pouring over books about witchcraft, Wicca, and the occult, and trying spells with her friends.

Unfortunately for Weaver, the fun did not last for very long.  Pretty soon, the torment from the demon spirits that she had invited to be around her became quite nightmarish…

“You would feel demon spirits literally walking by you like a human being was walking by you,” says Jenny. “Touching you. Scraping the wall. It went from, ‘Oh, this is gonna be really fun,’” says Jenny, “into, ‘I’m gonna choke you out until you die. I’m gonna take your life.’ All the time. Constantly tormented.”

This sort of thing is far more common than most of us would like to admit.

In fact, many “mental health disorders” actually have a spiritual cause, and some mainstream scientists are starting to figure this out.

For instance, M. Kemal Irmak just had a paper published in the Journal of Religion and Health that explored the link between schizophrenia and demonic possession…

As seen above, there exist similarities between the clinical symptoms of schizophrenia and demonic possession. Common symptoms in schizophrenia and demonic possession such as hallucinations and delusions may be a result of the fact that demons in the vicinity of the brain may form the symptoms of schizophrenia. Delusions of schizophrenia such as “My feelings and movements are controlled by others in a certain way” and “They put thoughts in my head that are not mine” may be thoughts that stem from the effects of demons on the brain. In schizophrenia, the hallucination may be an auditory input also derived from demons, and the patient may hear these inputs not audible to the observer. The hallucination in schizophrenia may therefore be an illusion—a false interpretation of a real sensory image formed by demons. This input seems to be construed by the patient as “bad things,” reflecting the operation of the nervous system on the poorly structured sensory input to form an acceptable percept. On the other hand, auditory hallucinations expressed as voices arguing with one another and talking to the patient in the third person may be a result of the presence of more than one demon in the body. (p. 776)

So what should people do if they think that they have opened a door to demonic spirits?

Well, Jenny Weaver says that she finally got free when someone led her in a prayer to renounce witchcraft…

As we get even deeper into the end times, supernatural manifestations will become increasingly common.

Hollywood has exported occult culture all over the globe, and on a daily basis millions upon millions of people are opening up spiritual doors that they shouldn’t be opening.

This is creating a massive worldwide spiritual crisis, but the vast majority of the people out there still do not understand what is happening.

6 thoughts on “Is There A Reason Why Demonic Possession Seems To Be Getting A Lot More Common In Our Society?”