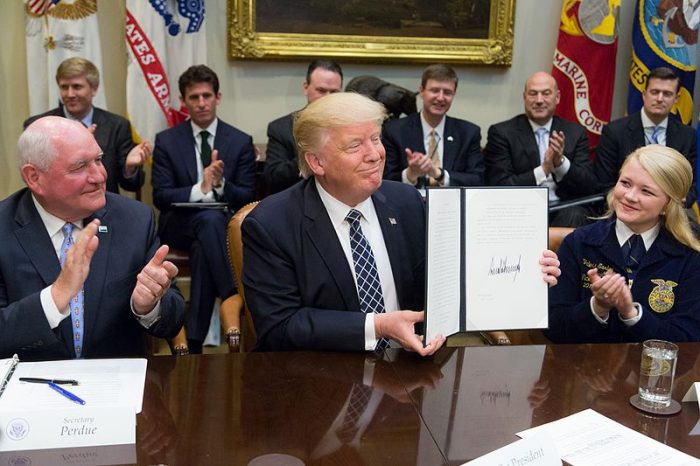 On Thursday, the U.S. House of Representatives finally approved a bill that would repeal and replace significant portions of the law that created Obamacare. But it was a very close vote. On Donald Trump’s 105th day in the White House, 217 members of the House voted in favor of the bill, and 213 members of the House voted against the bill. Of course “Trumpcare” is far from perfect, and it actually does very little to fix our rapidly failing healthcare system, but the reason why this is the best thing that Trump has done so far is because this bill would greatly reduce federal funding for Planned Parenthood. But first this bill must get through the Senate before it can become law, and that is looking extremely doubtful at this point. In fact, The Hill is reporting that one Republican Senator has said that this bill has less than a 20 percent chance of succeeding in the Senate…

A senior GOP senator said the chances of getting 51 votes for legislation based on the House healthcare bill are less than 1 in 5.

The senator also put the chances that the House bill will meet Senate budgetary rules preventing a filibuster at less than 1 in 5, meaning portions of the legislation would have to be removed.

Lawmakers are keeping quiet about their concerns because they want to help Speaker Paul Ryan (R-Wis.), whose job they fear may be in jeopardy if the House fails again to approve an ObamaCare repeal bill.

Yes, I know that Trump and the Republicans in the House were greatly celebrating on Thursday, but there really isn’t anything to celebrate yet.

The Senate is probably going to come up with an entirely different version of this legislation, and it is likely to look far different from the bill that just passed the House.

If a bill of some sort can actually get through the Senate, and that is a huge “if”, then an attempt would be made to reconcile the differences between the two bills, and then the final version would be submitted to both the House and the Senate for an up or down vote.

So please don’t think that an Obamacare repeal is a done deal.

The truth is that it probably is not going to happen any time soon.

But for the moment, I am going to applaud President Trump and House Republicans for doing something right. I have been very tough on them in recent weeks, and rightly so, but when they do something good I am certainly going to give them the praise that they are due.

The bill that the House just passed would greatly reduce federal funding for Planned Parenthood, and that fact alone more than makes up for all of the other flaws in it. The following comes from CNS News…

The American Health Care Act—the Obamacare repeal-and-replace bill that the House of Representatives passed by a 217-to-213 vote this afternoon–will temporarily and significantly reduce, but not eliminate, federal funding for Planned Parenthood.

The bill will prevent Planned Parenthood from receiving funding through “mandatory” federal funding streams—primarily Medicaid—for exactly one calendar year after the president signs it.

But it does not prevent Planned Parenthood from getting “discretionary” funding through the Title X family planning program.

It is just for one year, which is far from ideal, but at least for 12 months Planned Parenthood would see their funding go down by hundreds of millions of dollars…

The pro-life bill would eliminate more than $390 million (over 86%) of over $450 million in annual federal funding to Planned Parenthood, from all mandatory spending programs. The measure also redirects funding to community health centers which outnumber Planned Parenthood facilities 20 to 1 and offer a wider array of health care services, but not abortion.

Of course this is one of the provisions in the bill that some Republicans in the Senate want to eliminate.

It is extremely unlikely that any bill that even defunds Planned Parenthood in part will ever get through the Senate, but Trump should make an all-out effort to get this accomplished anyway.

And if Republican leadership can somehow get a bill through the Senate and signed into law that at least significantly reduces federal funding for Planned Parenthood, I will officially take back all of the negative things that I have said about the Republicans so far this year.

The order, signed during a ceremony in the White House Rose Garden, directs the Internal Revenue Service to exercise “maximum enforcement discretion” over the so-called Johnson amendment, which prevents churches and other tax-exempt religious organizations from endorsing or opposing political candidates. The order also provides “regulatory relief” for organizations that object on religious grounds to a provision in Obamacare that mandates employers provide certain health services, including coverage for contraception.

All Americans, including Christians, should be free to express their political beliefs without fearing repercussions from the federal government. The Johnson Amendment was probably always unconstitutional, and that is one of the reasons why it has never really been enforced. Congress should go even farther and completely repeal it, and hopefully that will happen someday.

So once again I want to take this opportunity to applaud Trump for doing something right. This is a good executive order, although it doesn’t quite go far enough. A major war against people of faith is being waged by very powerful forces in this country, and I am thankful for a president that is at least trying to keep some of the heat off of our backs.

I tend to get criticized by both the pro-Trump and anti-Trump camps because I try to be objective.

When our politicians do things that are wrong, I am going to say that they are wrong.

And when our politicians do things that are right, I am going to say that they are right.

We lose credibility when we act as cheerleaders for politicians that are “on our side” no matter what they say or do.

1 thought on “Is This The Best Thing That Donald Trump Has Done So Far?”