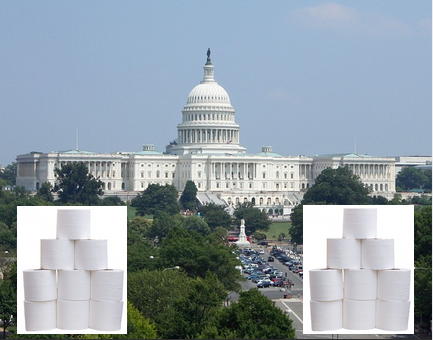 Is it fair to compare Congress to a toilet?  If there is one institution that embodies the corruption that permeates Washington D.C., it is the United States Congress.  Dominated by extremely selfish career politicians that are primarily interested in raising enough money to win the next election, Congress has become a cesspool of filth, fraud and malfeasance.  The American people are absolutely sick of this, and that is why approval ratings for Congress are consistently much lower than for any other political institution.  In fact, at this moment Congress has an average approval rating of just 18.3 percent according to Real Clear Politics.  Donald Trump captured the imagination of tens of millions of American voters when he pledged to “drain the swamp” during the last election, but I say that it is time to “flush the toilet” because the only way that we will ever be able to turn the federal government in a positive direction is by clearing out as many of these Congress critters as possible.

Getting Donald Trump into the White House was the biggest political miracle in American history, but now his agenda is almost completely stalled and it is Congress that is to blame.

For example, Trump repeatedly pledged that he was going to build a “big, beautiful wall” along the southern border to combat illegal immigration, but at this point funding for that wall is being completely blocked.

Trump also pledged that Obamacare would be repealed very rapidly once he became president, but that obviously has not happened.

In fact, it is looking quite doubtful that a bill to repeal Obamacare will ever get through the U.S. Senate…

Senate Majority Leader Mitch McConnell (R-Ky.) is tempering expectations that the Senate will pass an overhaul of the nation’s healthcare system, promising his colleagues a vote but not success.

McConnell in his public comments and private conversations about the ObamaCare repeal and replace bill is painting a more sober picture than Speaker Paul Ryan (R-Wis.), who in March guaranteed passage through the House.

McConnell is stopping well short of any grand pronouncement.

Trump also promised all of us that our taxes would be going way down, but even though the Republicans control both houses of Congress this also seems to be going nowhere fast.  The following comes from the Wall Street Journal…

The GOP’s dreams have collided with interest-group lobbying and the tax system’s reality. Politicians all profess to hate the tax code, but they don’t agree on exactly what they hate. Voters gripe about complexity but are wary of losing cherished breaks that are woven into the economy.

“Eventually you run out of ways to pay for your promises,” said Alan Cole, an economist at the Tax Foundation, which favors a simpler code with lower rates. “There aren’t any free obvious sources of money where you can just do the thing and nobody gets mad.”

I could bring up a whole bunch of other issues such as the national debt, trade with China, unconstitutional government surveillance, etc. but I think that you get the point.

Trump’s presidency is going to be mostly wasted if we do not get him some help.  And I am not just talking about clearing out more Democrats.  Right now the Republicans control the Senate and the House, but the problem is that most of them are “establishment Republicans”.  Career politicians from both parties have sold their souls to the special interests and big donors that fund their campaigns, and this is why such a dramatic political revolution is necessary.

Sadly, most Americans don’t realize just how deep the corruption goes in Washington these days.  To illustrate this, I would like to share just a few quotes from “The Confessions of Congressman X”.  It claims to have been written by an anonymous Democratic member of the House of Representatives, and the following quotes very much ring true to those of us that understand how things in D.C. really work in our day and age…

-“We spend money we don’t have and blithely mortgage the future with a wink and a nod. Screw the next generation. It’s about getting credit now, lookin’ good for the upcoming election.”

And it isn’t just political corruption that is the problem.  When you start peeling back the onion, you find some of the most disturbing things imaginable in political circles.  For example, just consider what police just uncovered in New York City…

Schwartz was caught with 3,000 child pornography images and 89 videos on his laptop after he downloaded them from the Internet. He surrendered his laptop to police, signed a release granting them permission to do a search of his hard drive, and was subsequently arrested. He has since posted $7,500 bail.

Of course stories such as this are just the tip of the iceberg.  There is so much more out there, but we aren’t really supposed to talk about those things.

Well, we can sit back and keep on complaining as our country deteriorates right in front of our eyes, or we can do something about it.

On Memorial Day back in 1982, President Ronald Reagan delivered a stirring address at Arlington National Cemetery.  The following is an excerpt from that address…

I have no illusions about what little I can add now to the silent testimony of those who gave their lives willingly for their country. Words are even more feeble on this Memorial Day, for the sight before us is that of a strong and good nation that stands in silence and remembers those who were loved and who, in return, loved their countrymen enough to die for them.

Yet, we must try to honor them—not for their sakes alone, but for our own. And if words cannot repay the debt we owe these men, surely with our actions we must strive to keep faith with them and with the vision that led them to battle and to final sacrifice.

Our first obligation to them and ourselves is plain enough: The United States and the freedom for which it stands, the freedom for which they died, must endure and prosper. Their lives remind us that freedom is not bought cheaply. It has a cost; it imposes a burden. And just as they whom we commemorate were willing to sacrifice, so too must we—in a less final, less heroic way—be willing to give of ourselves.

There is no war for us to fight, but let there be no doubt that we are in the midst of a great battle for the soul of our nation.

If this generation of Americans does not stand up and defend liberty and freedom, the forces that seek to destroy our country will win by default.

For years, many of us have been trying to persuade our leaders to do the right things, but by now it has become exceedingly clear that they simply are not listening.

So if we want the direction of our country to change, we have got to vote them out and replace them with others that will listen to the will of the people.

I am under no illusion that this will be easy.  The special interests and the big donors have a tremendous amount of money, and the mainstream media is very closely allied with the establishment.

But the election of Donald Trump showed us that anything is possible, and I choose to believe that it is possible for us to take our government back.

We just have to be willing to try.

1 thought on “It’s Time To Flush The Toilet”