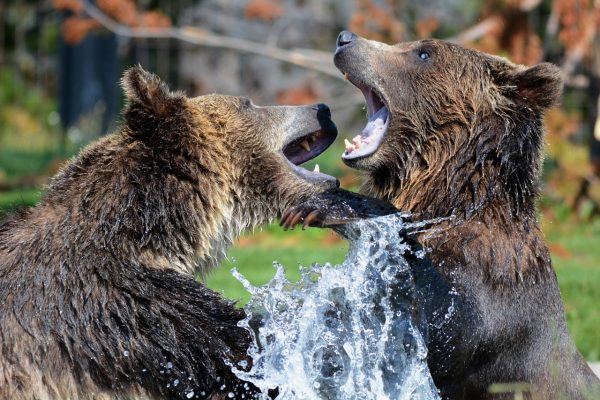 (By Daisy Luther) There’s nothing more dangerous than a mama bear defending her cubs. Get between them and you’ll find out fast. In the world of nature, mother animals are among the most fierce of all protectors.

The same is true in the human world, too. In honor of Mother’s Day, here are the survival stories of three women who earned the title “Mama Bear.”

This mom used her body as a shield to protect her children from a tornado.

In 2012, Stephanie Decker protected 8-year-old son, Dominic and 5-year-old daughter, Reese from a tornado by shielding them with her own body.  The children survived without a scratch because Decker never let go of them, even while she lost both legs to the twister.

Decker, 37, and her family were smack dab in the middle of a tornado outbreak Friday that included 140 reported twisters, 76 confirmed landings and 39 deaths.

“It was nothing I expected,” the Henryville, Ind., woman said. “I never, ever thought in a million years my house would be blown away.”

…”I assumed I was safe and I heard the roar like a train, and I heard it behind me, and I knew it was coming,” she recalled today. “And it was so loud that I knew that I needed to do something different. I knew staying put wasn’t going to work.”

So Decker acted. She dashed down into her home’s basement with son Dominic, 8, and daughter Reese, 5. As the house began to disintegrate she tried to shield them with a comforter.

She was crushed under the cascade of debris.

“I remember the whole thing,” she said. “I stayed conscious the whole time. I couldn’t afford [to pass out]. They needed me. They had to have me, so I had to figure out what to do. And my son is a hero. He went to get help.”

Both her legs were smashed. She’d also suffered a punctured lung.

Her children, however, were unscathed. (source)

After the tornado passed, young Dominic ran to the neighbors for help. Decker lost one leg above the knee and the other above the ankle.

This mom saved her child from freezing when they were stranded in -20F weather.

In 2016, Kristin Hiebert was driving with her four-year-old daughter Avery one evening when her car slid off the road down an embankment. She was very badly injured and she knew little Avery could quickly freeze to death in the frigid Canadian weather.

Temperatures dipped to -20°F in Manitoba that night. For 10 long hours, Hiebert protected Avery with the only heat source she had—her own body. The badly injured mom spent the entire night lying on top of her daughter, until the sun came up.

Then, even as frostbite developed on her knees, lower legs, and feet, and she fought through the excruciating pain of two broken arms, a broken neck, broken ribs, and a broken leg, the desperate mother decided she had to seek out help. She climbed up the embankment as Avery cried from below for her mom.

Thankfully, a lab technician named Tina Dubyts, who was on her way to work, noticed Hiebert. She described Hiebert to local news station CBC News, saying, “She was in shock. She was obviously frozen. She just kept talking about her daughter.”

The good Samaritan called for help and then went to find Avery, who she discovered curled up in the wreckage of the car, in a spot where a passenger-side tire used to be. (source)

Little Avery escaped with only scrapes and minor frostbite on one foot, but Hiebert faced numerous surgeries to repair her severe injuries. It turned out that her feet were too badly frozen to recover and both were amputated above the ankles. Avery made a full recovery.

This mom dragged a would-be thief out of the car with her children in it.

When two men decided to steal a Florida mom’s car in 2016, they quickly discovered they were messing with the wrong mama. What they didn’t realize was that the woman had two children sleeping in the backseat of the car.

…The men are then seen trying to carjack a woman in a red vehicle.

Both men got into the car — one in the driver’s seat, and one in the passenger’s seat.

The victim, a mother with her two children in the vehicle can be seen in the video fighting back — ripping a ski mask off one of the suspects.

“She was a mom — and what that bad guy didn’t know was in the backseat of that car were two kids — and she wasn’t going to let them be taken. She fought. She dragged the guy out of the car and they both ran away like cowards,” Carl Zogby with the Hialeah Police Department said. (source)

The two men hopped into a getaway car driven by a woman and were caught after a short chase when they crashed into a fence. All three criminals were charged with attempted carjacking and fleeing police.

Moms will do anything to save their children.

Most mothers out there would do anything to protect their children, even at the risk of their own lives. I knew the second my first baby was born that there was nothing in the world I wouldn’t do to keep her safe and every mom I know feels the same way. For most of us who are parents, our children are the number one reason we prep.

Happy Mother’s Day to all the Mama Bears out there!

About the Author: Daisy Luther is a coffee-swigging, gun-toting blogger who writes about current events, preparedness, frugality, voluntaryism, and the pursuit of liberty on her website, The Organic Prepper. She is widely republished across alternative media and she curates all the most important news links on her aggregate site, PreppersDailyNews.com. Daisy is the best-selling author of 4 books and lives in the mountains of Virginia with her two daughters and an ever-growing menagerie. You can find her on Facebook, Pinterest, and Twitter.