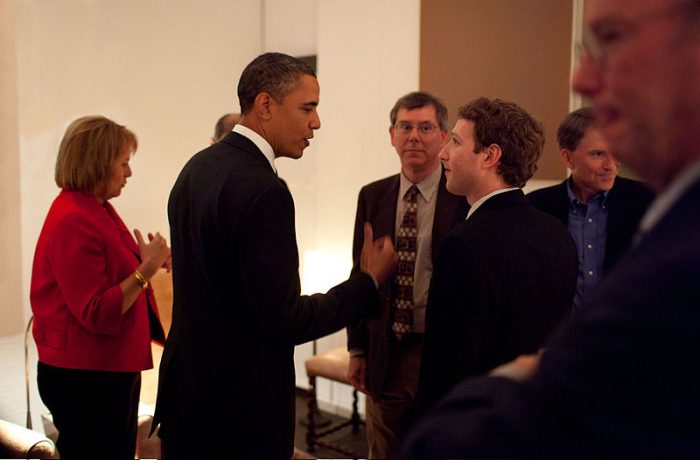 Donald Trump has proven that you don’t have to be a career politician to successfully run for president, and so now a number of top celebrities are actually seriously thinking about running against him in 2020. Unless Hillary Clinton runs again, the Democrats really don’t have an obvious choice, and so this next election cycle presents a unique opportunity for outsider candidates that may want to test the political waters. In politics, timing is everything, and for celebrities at the peak of their popularity the 2020 election may be their best and only shot at the highest office in the land.

One name that keeps coming up over and over again is Facebook CEO Mark Zuckerberg. As Salon has detailed, he is already behaving very much like a presidential candidate…

Zuckerberg recently started his “personal challenge for 2017,” which is focused on meeting individuals in every state. Just last week Zuckerberg visited a Ford factory in Michigan and made an unexpected visit to Ohio where he was hosted by a family of Democrats that voted for Donald Trump, according to the Guardian. A few days later Zuckerberg was on the move to Indiana where he met with members of a fire department in Elkhart, and then he finished his trip in Wisconsin. He said he needs to visit about 30 states to complete the challenge by the end of the year.

David Plouffe, who served as campaign manager for Barack Obama, “joined the philanthropic Chan-Zuckerberg Initiative, to lead policy and advocacy. Other politicians from both parties have also joined the organization,” according to Vanity Fair.

Zuckerberg also recently backtracked on his stance as an atheist. “I was raised Jewish and then I went through a period where I questioned things, but now I believe religion is very important,” Zuckerberg said. Of course, it’s quite difficult for someone to run for president and not believe in a God.

Because Facebook has become so immensely powerful, there are some that would suggest that going to the White House would actually be a step down for Zuckerberg.

So far, he seems to be the most serious of the “celebrity candidates”, but another that is getting quite a lot of attention right now is “The Rock” Dwayne Johnson. During a recent interview with GQ, he said that a run for president was “a real possibility”…

So, after all that consideration, Johnson doesn’t hesitate when I ask him whether he honestly might one day give up his life as the highest-paid movie star on earth—which is unquestionably easier, more fun, and more lucrative than being president of the United States—in order to run for office. “I think that it’s a real possibility,” he says solemnly.

And this is not the first time he has made such a statement. Even before the 2016 election, Johnson was openly talking about a political career…

Last summer, Johnson, who was the highest paid actor of 2016, bringing home a whopping $64.5 million, told ABC’s “Good Morning America” co-host Michael Strahan that a political career is “very real” to him.

The “Baywatch” star said the idea of him becoming commander in chief “has become a legit thing to some people.” He said he will take the “temperature of the American people” as “time goes on.”

“If it is a very real, overwhelming, positive, strong, ‘We want you to run for president,’ and if I felt that I can step up to the plate and become a tremendous leader for our country and make a real difference and make change, I would do it,” he said at the time.

Of course if he continues to make more than 60 million dollars a year, it may be difficult to throw all of that away for the world of politics.

Katy Perry is another name that Democrats are throwing around right now. She was more involved in Hillary Clinton’s campaign than just about any other major celebrity, and a message that she posted on Instagram has many of her followers wondering if Perry might step up to the plate herself in 2020…

Perry was a constant presence on the campaign trail with Hillary Clinton, campaigning for the eventual Democratic nominee before the primaries began.

And perhaps all that political chatter got her thinking — why don’t I run for office myself? In July 2015, she posted an Instagram with Bill Clinton and George W. Bush with the caption “42, 43, 46?!”

If Perry were to run for president, one thing is quite likely: She’d run on a pro-Planned Parenthood platform. The singer donated $10,000 to the organization after the 2016 election.

Many liberals would love to see “the first female president” in 2020, and a lot of them are suggesting that Oprah Winfrey would be an ideal candidate. In fact, Michael Moore suggested that she would be an excellent candidate just one week after the election…

RUBENSTEIN: Have you ever thought that given the popularity you have—we haven’t broken the glass ceiling yet for women—that you could actually run for president and actually be elected?

RUBENSTEIN: Because it’s clear you don’t need government experience to be elected president of the United States.

WINFREY: That’s what I thought. I thought, ‘Oh gee, I don’t have the experience, I don’t know enough.’ Now I’m thinking oh, oh.

But of course you don’t have to run for president to get involved with national politics. Just this week we learned that actor Antonio Sabato Jr. has decided to run for Congress as a Republican…

Actor Antonio Sabato Jr has decided to run for Congress after claiming he was blacklisted by Hollywood producers for his public support of President Donald Trump.

Sabato, 45, will challenge US House Representative Julia Brownley, a Democrat representing the Westlake Village area in California, in the 2018 election according to documents filed with the Federal Election Commission on Monday.

His choice to run was confirmed by Republican strategist Charles Moran, according to the Los Angeles Times.

Is there still room for ordinary citizens to step forward in this day and age, or do you have to be wealthy and powerful to run for office?

We can’t just sit back and wait for someone else to change the direction of our nation. If we truly want to make a difference, now is the time for good men and good women all over the country to step up and take action.

1 thought on “Mark Zuckerberg, The Rock, Katy Perry And Oprah Winfrey Are All Thinking Of Running For President”