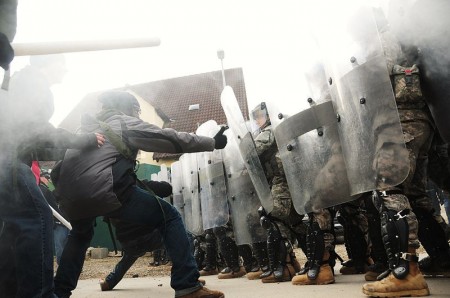 The National Guard will “help restore peace and order and to protect the citizens of Ferguson,” the statement said.

The predominantly black city of 21,000 on the outskirts of St. Louis has been under siege since Aug. 9, when white police officer Darren Wilson, 28, fatally shot unarmed black teenager Michael Brown. Protesters have been met with a heavy police presence, resulting in fierce nightly clashes.

“Tonight, a day of hope, prayers, and peaceful protests was marred by the violent criminal acts of an organized and growing number of individuals, many from outside the community and state, whose actions are putting the residents and businesses of Ferguson at risk,” the statement said. “These violent acts are a disservice to the family of Michael Brown and his memory, and to the people of this community who yearn for justice to be served, and to feel safe in their own homes.”

An autopsy conducted for the family of Michael Brown found no evidence that he struggled with a Ferguson, Missouri, police officer before his death, the pathologist in charge of the examination said Monday.

Police have said the 18-year-old fought with Officer Darren Wilson in the moments before he was shot in an incident eight days ago that left the young man dead, his community in turmoil and many around the nation angry and thirsty for answers.

Dr. Michael Baden said no signs of a struggle were revealed in his autopsy of Brown’s body, conducted after an official examination by the St. Louis County Medical Examiner’s Office.