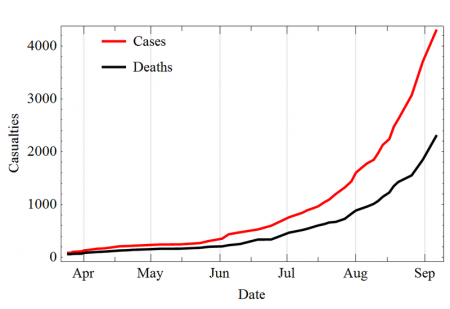 There is not a single empty bed available for an Ebola patient in Liberia right now, but thousands more cases are expected in the coming weeks. Entire families have been driving around in taxis looking for some place that will take their sick family members, but every treatment facility is already full. According to the World Health Organization, many of those potential Ebola patients end up returning to their homes where there will inevitably spread the virus to even more people. What we are watching unfold is literally a nightmare scenario. According to the WHO, 4,293 cases of Ebola have now been recorded and 2,296 people have died from the disease. But what makes those numbers so alarming is that the spread of the virus appears to be accelerating. 47 percent of the deaths and 49 percent of the cases have come in the last 21 days. If Ebola continues to spread at an exponential pace like this, we could be looking at the greatest public health crisis in any of our lifetimes.

Health officials are feverishly trying to open new treatment facilities in Liberia, but they can’t seem to keep up with the number of new cases. The moment a new facility opens, it is immediately filled…

“As soon as a new Ebola treatment facility is opened, it immediately fills to overflowing with patients, pointing to a large but previously invisible caseload,” the agency said in a statement about the situation in Liberia. “Many thousands of new cases are expected in Liberia over the coming three weeks.”

And as I mentioned above, some potential Ebola victims haven’t been able to find anywhere to go. The following comes from a recent NBC News report…

And because Ebola victims have been using taxis to travel around in search of treatment, that has made those taxis “a hot source of potential Ebola virus transmission”…

“According to a WHO staff member who has been in Liberia for the past several weeks, motorbike-taxis and regular taxis are a hot source of potential Ebola virus transmission, as these vehicles are not disinfected at all, much less before new passengers are taken on board,” WHO said.

“When patients are turned away at Ebola treatment centers, they have no choice but to return to their communities and homes, where they inevitably infect others, perpetuating constantly higher flare-ups in the number of cases.”

At this point there is no hope that Ebola will be defeated in Liberia any time soon. In fact, the WHO says that it is anticipating “thousands of new cases” in Liberia in the coming weeks.

Things have gotten so bad that a door-to-door campaign has been organized to try to track down those who have the virus. Between September 19th and September 21st, volunteers will visit every single home in Liberia…

Volunteers in Sierra Leone are to visit every home in the country of 6 million to track down people with Ebola and remove dead bodies.

Steven Ngaoja, the head of the country’s Ebola Emergency Operations Centre, said more than 20,000 volunteers would go door-to-door as part of a three-day curfew.

He said every house in the country would be visited from September 19 to 21.

Hopefully all of those volunteers will be given proper protective equipment. Otherwise, such an endeavor could end up just accelerating the spread of the virus even more.

And the truth is that there are probably far more people sick in Liberia than we are being told.

In fact, even the WHO admits that the official numbers greatly underestimate the scope of this crisis…

As well as struggling to contain the disease, the organization is having difficulty compiling data on the number of cases, said Sylvie Briand, the director of WHO’s department of pandemic and epidemic diseases.

“We know that the numbers are under-estimated. We are currently working to estimate the under-estimation,” Briand told a news briefing in Geneva.

“It’s a war against this virus. It’s a very difficult war. What we try now is to win some battles at least in some places.”

One doctor says that the real numbers could be “double or triple” what we are being told.

But nobody really knows.

And as the numbers continue to grow, there won’t be places to treat all of the new victims.

According to one report, there are only approximately 570 beds in Ebola treatment facilities in Guinea, Sierra Leone and Liberia combined.

Needless to say, that is not going to do the job, and it is now being reported that Ebola is surging back in places where it was thought that it had been beaten.

Right now we are losing the battle to contain this virus, and this might just be the beginning of this plague.

The other day my friend Mac Slavo shared a video that was produced by MIT and the New England Complex Systems Institute. This video uses a computer simulation to show what the spread of Ebola could look like if it goes worldwide…

Like I said, we could potentially be facing the greatest health crisis that any of us have ever seen.

So let us hope and pray that this virus does not get out of Africa.

But all it takes is a single carrier.

For example, it is being reported that a Nigerian woman is now being tested for the Ebola virus in Italy…

A Nigerian woman resident in Italy has been hospitalised with symptoms that have led doctors to fear she may be the country’s first case of someone contracting the Ebola virus.

The woman, who had recently returned from a visit to Nigeria, has been hospitalised in Ancona and was undergoing tests in a specialist unit to establish whether she has contracted the virus which has killed more than 2,000 people since the start of the year.

“She is presenting with symptoms that could be those of Ebola,” a spokesman for the local authorities in the Le Marche region said.

And if it gets to the United States, it could be worse than any Hollywood movie ever imagined that it could be.

If you believe that the federal government is going to come swooping in to save you if Ebola does come here, you might want to think again. Just consider the following excerpt from a recent CNN article…

A federal investigation has found that the DHS is totally “ill-prepared” for something like the 2009 H1N1 influenza pandemic — or something worse, such as a global Ebola outbreak or the 1918 flu pandemic that killed an estimated 21.5 million people, according to a report released by the Office of the Inspector General on Monday.

In 2006, Congress gave DHS $47 million to prepare for such a national medical crisis. And the department did go shopping; it spent millions on this equipment that might now be completely worthless, missing or unnecessary.

For example, the audit found more than 4,000 bottles of expired hand sanitizer in storage with the DHS. Many of those bottles have been expired for up to four years.

The truth is that we are not prepared for something like this.

If an outbreak erupts in major U.S. cities, there is the potential that it could start spreading like wildfire.

So let us hope and pray for the best, but let us also get prepared for the worst.