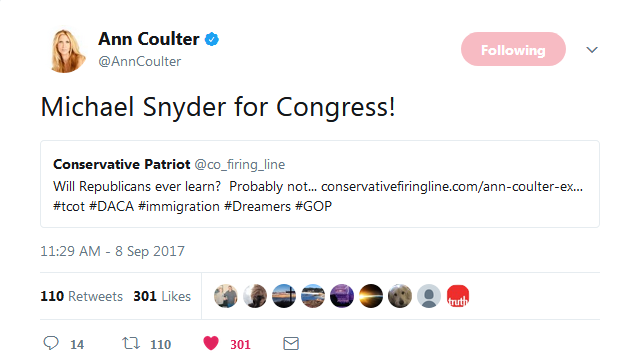 I was absolutely floored when I learned what had happened. On Saturday night I was going through my emails, and I discovered that one of my supporters had sent me a message informing me that Ann Coulter had mentioned me in a tweet. I wondered if that could possibly be true, so I immediately went to Twitter to confirm it. It turns out that she had come across an article on Conservative Firing Line in which I had mentioned her, and along with retweeting that article she included the following message: “Michael Snyder For Congress!”

Needless to say, the political establishment up here in Idaho is not going to like that one bit. I have been told over and over again that I am “too conservative” for Idaho, and the RINOs definitely do not want prominent conservatives on the national level getting behind me. Because there is no incumbent, this is a totally wide open race, but many of the “establishment Republicans” in this state would rather have a steaming pile of garbage win than see me take this seat.

They don’t like me because I am unconventional, I am a fighter, and I am not afraid to stand up to members of my own party. I am very open about the fact that if I win I plan to campaign against RINOs all over the nation, and so as you can imagine that is not making me a lot of friends among the establishment. That is why I need your help. The establishment money is not going to get behind me, so in order to win this must be a grassroots effort. If you would like to contribute to the campaign, you can do so here…

I think the fact that I am a fighter is why Ann Coulter likes me. For way too long we have put up with spineless Republicans that give the Democrats virtually everything that they want. If the Democrats are going to get everything their way no matter who is in power, what is the point of even having a Republican Party?

The more time goes by, the more I appreciate Ann Coulter. She fights relentlessly for the things that she believes in, and she never backs down. If every Republican member of Congress was just like her, we would not be in the giant mess than we are in today. I am so glad that she wants me to win this race, and if you would like to help make that a reality, we could really use your help this month…

At the end of this month is our first big FEC deadline. Conservative organizations around the country will be looking to see how much I raised compared to my opponents, and they will be making decisions on where to allocate resources based on those numbers.

If I don’t raise as much money as my opponents when the next report comes out, it is likely that I won’t get some big checks from conservative organizations that I otherwise could have gotten. So I can’t stress strongly enough how much I need to hear from each one of you. This is do or die time, and we have 21 days for a miracle to happen…

When I say that we need a “miracle”, I am not exaggerating. Even though so many other aspects of the campaign are going tremendously well, fundraising is not nearly at the level that it should be. And of course I take responsibility for that. Fundraising is new to me, and I have a lot to learn. Plus, I was raised to be very self-sufficient and independent, and it is not easy for me to ask for help.

So let me just be very, very honest with you. We desperately need financial help for this campaign. Even though everything else is going so incredibly well, a lack of financial support could absolutely cripple us. Every single dollar is so incredibly valuable at this stage, and I am praying for hundreds of people to contribute to the campaign after seeing this message…

In so many other ways this campaign is taking off spectacularly. But if we don’t get some fuel for our engines, we are going to come crashing back down to the ground. We know what we need to do in order to get our message out to every voter in this district, and if we can get that done we will win.

Since there is on incumbent in this race, it is a golden opportunity to send a true freedom-loving conservative to Congress. People always complain that we “don’t have anyone good to vote for”, but now that good candidates are stepping forward, it is absolutely imperative that we support them…

If candidates such as myself don’t win Republican primaries next spring, the choices will be exceedingly bleak in November 2018. In most cases, people will be stuck choosing between a Democrat and an establishment Republican.

If not, now is the time to take action.

As you can see from what Ann Coulter posted, we are starting to create buzz about this campaign all over the nation.

But I can’t do this alone, and I desperately need your help.

1 thought on “Ann Coulter Stuns The Establishment By Posting This Message On Twitter: ‘Michael Snyder For Congress!’”