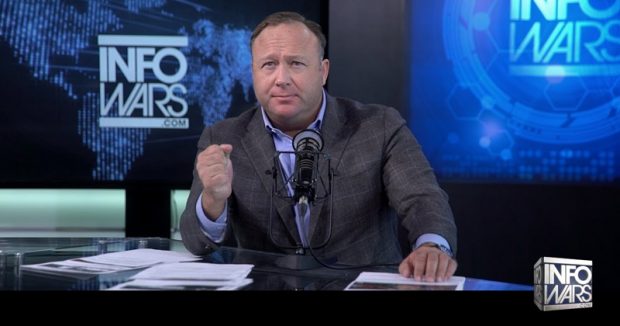 (Prison Planet) Apple, Spotify, Facebook and YouTube all banned Infowars within 12 hours of each other, illustrating how last night’s purge was a coordinated effort and has nothing to do with these platforms enforcing “hate speech” rules.

Here are the real reasons Infowars is being purged by Big Tech;

– Infowars is widely credited with having played a key role in electing Donald Trump. By banning Infowars, big tech is engaging in election meddling just three months before crucial mid-terms.

– With the Infowars ban, Apple, Facebook , Spotify & YouTube (Google) have all now ascribed themselves the power to remove people & outlets from their platforms based on their political opinions. This power will be abused time and time again to meddle in elections.

– The ban also sets the precedent that the mere charge alone of having committed “hate speech,” with no specific examples even provided, is enough to memory hole an individual or group’s digital presence.

– The ban is just part of a wider censorship purge that also use stealth censorship, shadow banning and algorithmic manipulation to hide and bury conservative content.

– Apple also chose to shut down Infowars after we repeatedly criticized them for working with and selling data to the Communist Chinese government. Just a coincidence, I’m sure.

Apple chose to shut down Infowars after repeated criticism of them selling data to and working with Communist Chinese government. Just a coincidence. pic.twitter.com/OSu6ZOMdFG

For conservative media outlets who don’t speak out because they don’t like Infowars, we have a message for you – you’re next.

Facebook banned Infowars after lobbying by both CNN and Democratic Congressman Ted Deutch (D-FL). This isn’t “just a private company,” this is brazen political censorship.

This is the outcome of the left refusing to debate their ideas and simply no platforming their adversaries instead.

This is the modern day electronic equivalent of book burning.

This is throwing dissidents in the Big Tech gulag because their voices were becoming too loud and having too much influence.

This is the purge.

It will only intensify unless lawmakers act now to introduce a Digital Bill of Rights and treat social media giants as telecommunications companies who are forbidden by law from discriminating against people and media outlets based on their political opinions.