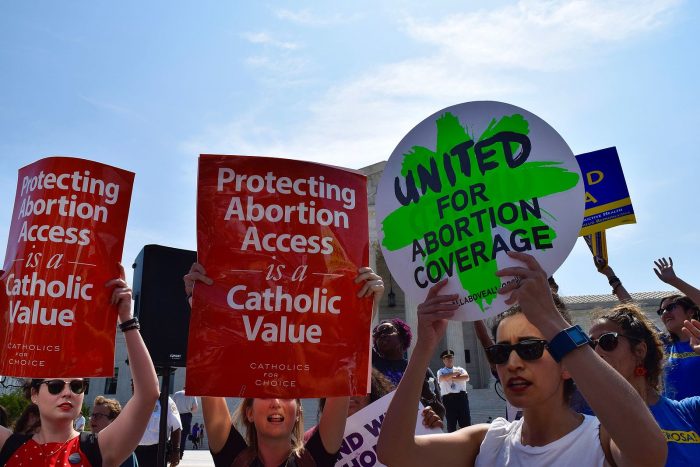 A new Wall Street Journal/NBC News survey has found that 71 percent of all American voters are opposed to overturning Roe v. Wade.  I must admit that I was rather dismayed when I saw the results of that poll.  The pro-life movement in the U.S. has been fighting so hard for so long, and yet it seems like we just continue to lose ground.  Yes, surveys have shown that a slight majority of Americans favor having some restrictions on abortion, but when it comes to getting rid of Roe v. Wade completely, voters are overwhelmingly against it.  In fact, this brand new Wall Street Journal/NBC News poll discovered that just 23 percent of voters want Roe v. Wade to be overturned…

Democrats are making Roe v. Wade a central theme in their opposition to Brett Kavanaugh’s nomination to the Supreme Court. And it might not be a bad strategy, if a recent poll is any indication.

I used to think that there was a vast army of people just like me out there, but I am starting to realize that is not the case at all.

23 percent is a depressingly low number, and according to NBC News it is “the lowest level of voters who want Roe overturned” in the history of their polling…

This is the highest level of support for the ruling, and the lowest level of voters who want Roe overturned, in the NBC-WSJ poll’s history dating back to 2005. For historical perspective, a Gallup poll in 1989 showed that 58 percent of voters supported the ruling, while 31 percent wanted it overturned.

Even if the Supreme Court does overturn Roe v. Wade someday, that won’t make abortion illegal.  Instead, each state will be able to determine whether it is legal or not, and from these numbers it is quite clear that most states (if not all) would continue to keep it legal.

The most surprising thing from this latest survey was how Republicans have shifted.  The following comes from Vox…

Support for Roe v. Wade is overwhelming among Democrats and independents: 88 percent and 76 percent, respectively. But even a majority of Republicans — 52 percent — don’t want to see the court ruling overturned.

Did you ever think that we would see the day when most Republicans want to keep Roe v. Wade?

With the numbers shifting so much in favor of Roe v. Wade, it is probably inevitable that we will start to see more pro-choice Republican candidates.  Overall, voters in the U.S. are far more likely to support a pro-choice candidate than they are a pro-life candidate…

Those of us in the pro-life movement have been exposing the crimes of Planned Parenthood for years, but it seems to have made little difference.

The Planned Parenthood abortion chain has been caught repeatedly performing abortions on abuse victims as young as 12 and 13 years old, failing to report suspected sexual abuse to authorities, and sending victims back to their abusers. A new investigative report report chronicles these cases and reveals Planned Parenthood’s decades-long pattern of helping child sex abusers cover up their crimes.

As LifeNews has documented multiple times, Planned Parenthood has a history of not reporting statutory rape or sexual abuse to authorities. The abortion corporation frequently covers up cases of rape with abortion and refuses to report rape cases to law enforcement.

Far more troubling is the fact that Planned Parenthood has been systematically harvesting organs from aborted babies and selling them off to the highest bidders.

But the American people don’t really seem alarmed by that either.

Is God really going to bless a nation that kills babies on an industrial scale without any signs of remorse?

In the end, we are in a battle for the soul of our nation, and it is a battle that we are losing.

The first is “Two in Three Americans Support Same-Sex Marriage.” Two in three Americans, in other words, have forgotten the reality that matrimony can only exist between men and women.

Twenty years ago the proportion was just over one in four. Support has steadily grown. If the trend holds, in a decade we can expect something pushing 90%.

Many on the left are totally freaked out right now about the Kavanaugh nomination.  They are convinced that they are about to lose all of “their rights” because Donald Trump is about to shift the court dramatically “to the right”.

But what everyone forgets is that Kavanaugh clerked for Justice Kennedy, and it was Kennedy that wrote the decision legalizing gay marriage.  Kavanaugh has always spoken very highly of Kennedy, and there are rumors that Kennedy pushed very hard to get Kavanaugh nominated.

And as for abortion, during his 2006 confirmation hearing Kavanaugh boldly declared “if confirmed to the D.C. Circuit, I would follow Roe v. Wade faithfully and fully.”

That doesn’t exactly sound like a pro-life activist to me.

No matter what happens with Kavanaugh’s nomination, nothing is likely to fundamentally change on important social issues any time soon.

I wish that I had different numbers to share with you, but I don’t.