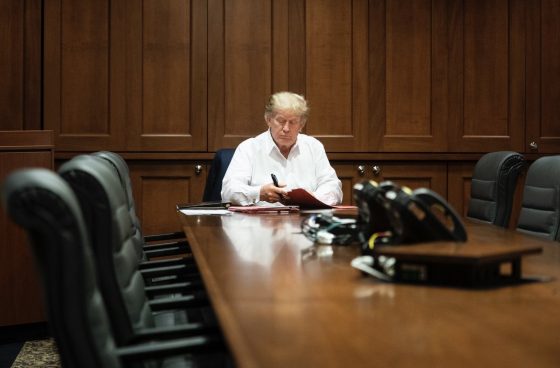 There was a time when a moment like this would have brought the entire nation together in unity.  Decades ago, news that the president of the United States was the victim of a deadly virus and had been rushed to the hospital would have been received with grave seriousness.  But in 2020, much of the population responded to the news that President Trump had been infected by the coronavirus with jokes, sarcasm and death wishes.  In fact, there were so many death wishes for Trump on Facebook and Twitter that major news outlets all over the U.S. were doing news stories about it.  We have never seen anything like this before, and it says a lot about where we are headed as a nation.

And it just wasn’t random Internet trolls that were reacting this way.  Activists, celebrities and well known campaign officials all decided that this was an appropriate moment to say some absolutely horrible things about Trump.  Here are 14 examples…

#1 Former Warren campaign staffer Max Berger: “Trump did this to himself. He inflicted this same misfortune upon millions of others.”

#1 Michael Moore: “That poor virus got sucked into his body and is now trapped there. How can it escape? He wants to use it as a prop. ‘See this China Flu? I BEAT IT! Just like I’ll beat Biden! They’re both a hoax!’ My thoughts and prayers, too, are with Covid-19.”

#1 Kathy Griffin: “I’d prefer you get medically treated at one of your ICE detention centers, but ok.”

#1 Kathy Griffin (again): “Ok fine. I’ll pray for him and the wife on one condition. NOT mild symptoms. And they each go on a ventilator, for at least 5 days. That’s my best and final.”

#1 Michael Ian Black: “Praying for Trump’s speedy recovery so he can go to jail.”

#1 Bradley Whitford: “The President’s arrogant, cynical, irresponsible denial of the deadly disease he now has is the most devastating self own in human history.”

#1 Mia Farrow: “Could he be making this up because he’s faced with losing & this is a way of bailing out while saving face”

#1 Joy Reid: “Here’s how wrecked Trump’s credibility is at this point: I’ve got a cellphone full of texts from people who aren’t sure whether to believe Trump actually has covid.”

#1 Linda Sarsour: “Seems like someone don’t wanna go back to the debate stage.”

#1 Sarah Aswell: “I think he’ll survive. Like a drunk driver always seems to be the only one to survive a collision with a bus of church children.”

#1 David Simon: “Honestly, when a man lies so damn much, am I wrong to imagine another cry of wolf for an October surprise? That Trump is claiming a positive test, will present as asymptomatic, or claim himself cured with bleach, then dismiss COVID again as a Democratic hoax? I’m wrong, right?”

Of course not everyone on the left responded with such vitriol.

I wish the President and the 1st Family the very best and a speedy recovery!

Good for Rainn, but this shows just how far we have fallen as a nation.

At this point, Dwight from The Office have become the voice of reason in our society.

It has become exceedingly clear that our nation is so divided that none of our current politicians are ever going to be able to bring us together again.

No matter who is residing in the White House, that individual is going to be deeply hated by a very large percentage of the population.  If the level of hatred in our country continues to grow, eventually it is going to get to the stage where our nation is essentially ungovernable by anyone.

For years I have been writing articles about how we desperately need to find a way to love one another, but those articles usually go over like a lead balloon.  The mainstream media has been training us to hate one another for such a long time, and at this point most Americans have decided that it feels good to hate those that are on the other side.

But a house divided with surely fall, and there is no future for a deeply fractured nation that is divided into factions that viciously hate one another.

One of the big reasons why the United States was so successful for such a long time was because nearly the entire population was united by a common set of values.  That is clearly no longer the case, and it is hard to imagine ever seeing such unity again.

At this point we are already seeing violence in the streets on a nightly basis, and many believe that we have now entered a period of permanent civil unrest.

For any society that wishes to function well, civility is not optional.  And so the fact that civility has almost entirely disappeared in Washington D.C. is extremely alarming.

If our leaders cannot even treat one another with dignity and respect, what hope is there for the rest of the nation?

The tremendous outpouring of hatred for Trump that we have witnessed over the past several days makes it clear that there will be no healing for America any time soon.

Instead, this upcoming election is likely to make our divisions even worse no matter who ends up winning.

I wish that things were not this way, but they are, and so we need to come to grips with the reality that we will be living in a very broken nation for the foreseeable future.