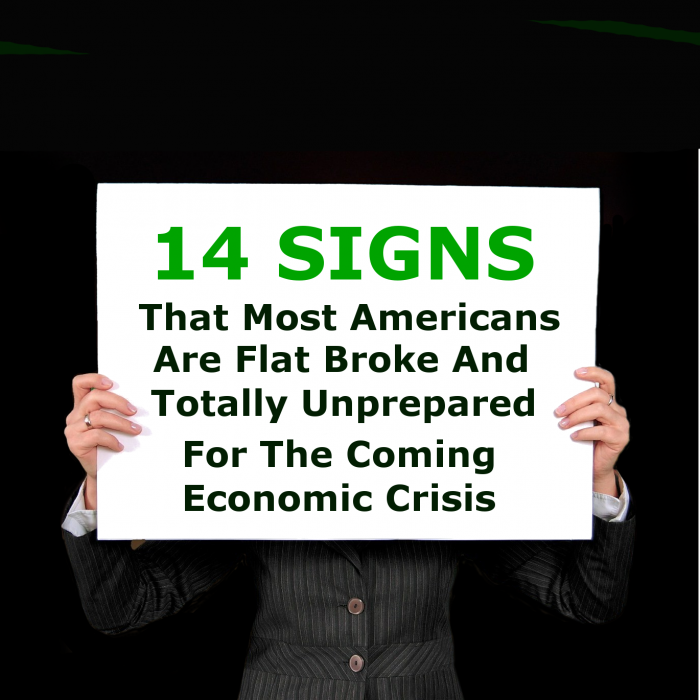 When the coming economic crisis strikes, more than half the country is going to be financially wiped out within weeks. At this point, more than 60 percent of all Americans are living paycheck to paycheck, and a whopping 24 percent of the country has more credit card debt than emergency savings. One of the primary principles that any of these “financial experts” that you see on television will teach you is to have a cushion to fall back on. At the very least, you never know when unexpected expenses like major car repairs or medical bills will come along. And in the event of a major economic collapse, if you do not have any financial cushion at all you will be a sitting duck. Yes, I know that there are millions upon millions of families out there that are just trying to scrape by from month to month at this point. I hear from people that are deeply struggling in this economy all the time. So I don’t blame them for not being able to save lots of money. But if you are in a position to build up an emergency fund, you need to do so. We have been experiencing an extended period of relative economic stability, but it will not last. In fact, the time for getting prepared for the next great economic downturn is rapidly running out, and most Americans are not ready for it at all. The following are 14 signs that most Americans are flat broke and totally unprepared for the coming economic crisis…

#1 According to a survey that was just released, 24 percent of all Americans have more credit card debt than emergency savings.

#2 That same survey discovered that an additional 13 percent of all Americans do not have any credit card debt, but they do not have a single penny of emergency savings either.

#3 At this point, approximately 62 percent of all Americans are living paycheck to paycheck.

#4 Adults under the age of 35 in the United States currently have a savings rate of negative 2 percent.

#5 More than half of all students in U.S. public schools come from families that are poor enough to qualify for school lunch subsidies.

#6 A study that was conducted last year found that more than one out of every three adults in the United States has an unpaid debt that is “in collections“.

#7 One survey discovered that 52 percent of all Americans really cannot even financially afford the homes that they are living in right now.

#8 According to research conducted by Atif Mian of Princeton University and Amir Sufi of the University of Chicago Booth School of Business, 40 percent of Americans could not come up with $2000 right now without borrowing it.

“Do you have 3 months emergency funds to cover expenses in case of sickness, job loss, economic downturn?”

#10 A different study discovered that less than one out of every four Americans has enough money stored away to cover six months of expenses.

#11 Today, the average American household is carrying a grand total of 203,163 dollars of debt.

#12 It is estimated that less than 10 percent of the entire U.S. population owns any gold or silver for investment purposes.

#13 48 percent of all Americans do not have any emergency supplies in their homes whatsoever.

#14 53 percent of all Americans do not even have a minimum three day supply of nonperishable food and water in their homes.

Perhaps none of this concerns you.

Perhaps you think that this bubble economy can persist indefinitely.

Well, if you won’t listen to the more than 1200 articles that set out the case for the coming economic collapse on my website, perhaps you will listen to former Federal Reserve Chairman Alan Greenspan. The following is what he recently told one interviewer…

We asked him where he thought the gold price will be in five years and he said “measurably higher.”

In private conversation I asked him about the outstanding debts… and that the debt load in the U.S. had gotten so great that there has to be some monetary depreciation. Specially he said that the era of quantitative easing and zero-interest rate policies by the Fed… we really cannot exit this without some significant market event… By that I interpret it being either a stock market crash or a prolonged recession, which would then engender another round of monetary reflation by the Fed.

He thinks something big is going to happen that we can’t get out of this era of money printing without some repercussions – and pretty severe ones – that gold will benefit from.

And as I have stressed so frequently, the signs that the next crisis is almost here are all around us.

For example, the Baltic Dry Index has just plunged to a fresh record low, and things have already gotten so bad that some global shippers are now filing for bankruptcy…

The unintended consequences of a money-printed, credit-fueled, mal-investment-boom in commodities (prices – as opposed to physical demand per se) and the downstream signals that sent to any and all industries are starting to bite. The Baltic Dry Index has plunged once again to new record lows and the collapse of the non-financialized ‘clean’ indicator of the imbalances between global trade demand and freight transport supply has the real-world effects are starting to be felt, as Reuters reports the third dry-bulk shipper this month has filed for bankruptcy… in what shippers call “the worst market conditions since the ’80s.”

Perhaps you do see things coming.

Perhaps you do want to get prepared.

If you are new to all of this, and you don’t quite know how to get started preparing, please see my previous article entitled “89 Tips That Will Help You Prepare For The Coming Economic Depression“. It will give you some basic tips that you can start implementing right away.

And of course one of the most important things is something that I talked about at the top of this article.

If at all possible, you have got to have an emergency fund. When the coming economic storm strikes, your family is going to need something to fall back on.

If you are trusting in the government to save you when things fall apart, you will be severely disappointed.