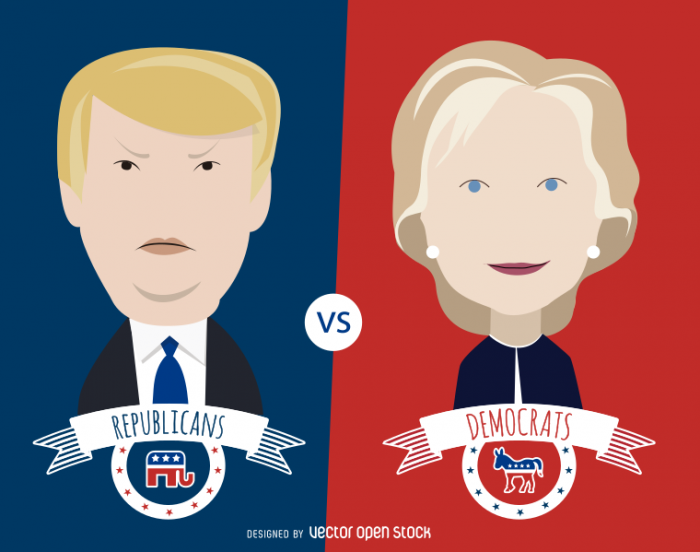 Are you ready for the most anticipated presidential debate in decades? It is being projected that Monday’s debate between Donald Trump and Hillary Clinton could potentially break the all-time record of 80 million viewers that watched Ronald Reagan and Jimmy Carter debate back in 1980. Many Americans probably hope to see some personal fireworks between the two nominees, but the two candidates have both expressed a desire to focus on substantive issues. There will likely be quite a few questions about the economy, and without a doubt this is an area where Trump and Clinton have some very sharp differences. The mainstream media would have us believe that the U.S. economy is in pretty good shape, and if that was true that would seem to favor Clinton. But is it actually true? The following are 26 incredible facts about the economy that every American should know for the Trump-Clinton debate…

#1 When Barack Obama entered the White House, the U.S. government was 10.6 trillion dollars in debt. Today, the U.S. government is 19.5 trillion dollars in debt, and Obama still has several months to go until the end of his second term. That means that an average of more than 1.1 trillion dollars will be added to the national debt during his presidency. We are stealing a tremendous amount of consumption from the future to make the economy look much, much better than it otherwise would be, and we are systematically destroying the future in the process.

#3 It isn’t just the federal government that is on a massive debt binge. Total U.S. corporate debt has nearly doubled since the end of 2007.

#4 Default rates on U.S. corporate debt are the highest that they have been since the last financial crisis.

#5 Corporate profits have fallen for five quarters in a row, and it is being projected that it will be six in a row once the final numbers for the third quarter come in.

#6 During the month of August, commercial bankruptcy filings were up 29 percent compared to the same period a year ago.

#7 The rate of new business formation in the United States dropped dramatically during the last recession and has hovered at that new lower level ever since.

#8 The Wall Street Journal says that this is the weakest “economic recovery” since 1949.

#9 Barack Obama is on track to be the only president in all of U.S. history to never have a single year when the U.S. economy grew by at least 3 percent.

#10 In August, the Cass Freight Index dipped to the lowest level that we have seen for that month since 2010. What this means is that the total amount of stuff being shipped around the country by air, by rail and by truck is really dropping, and this is a clear sign that real economic activity is slowing down in a major way.

#11 Capital expenditure growth has turned negative, and history has shown that this is almost always followed by a new recession.

#12 The percentage of Americans with a full-time job has been sitting at about 48 percent since 2010. You have to go back to 1983 to find a time when full-time employment in this country was so low.

#13 The labor force participation rate peaked back in 1997 and has been steadily falling ever since.

#14 The “inactivity rate” for men in their prime working years is actually higher today than it was during the last recession.

#15 The United States has lost more than five million manufacturing jobs since the year 2000 even though our population has become much larger over that time frame.

#17 One study found that median incomes have fallen in more than 80 percent of the major metropolitan areas in this country since the year 2000.

#18 According to the Social Security Administration, 51 percent of all American workers make less than $30,000 a year.

#19 The rate of homeownership in the U.S. has fallen every single year while Barack Obama has been in the White House.

#20 Approximately one out of every five young adults are currently living with their parents.

#21 The auto loan debt bubble recently surpassed the one trillion dollar mark for the first time ever.

#22 Auto loan delinquencies are at the highest level that we have seen since the last recession.

#23 In 1971, 61 percent of all Americans were considered to be “middle class”, but now middle class Americans have actually become a minority in this nation.

#24 One recent survey discovered that 62 percent of all Americans have less than $1,000 in savings.

#25 According to the Federal Reserve, 47 percent of all Americans could not even pay an unexpected $400 emergency room bill without borrowing the money from somewhere or selling something.

Despite all of the facts that you just read, the truth is that there is one particular group of people that have been doing quite well during the Obama years. I really like how Charles Hugh Smith made this point in one of his recent articles…

The top 5% of households that dominate government, Corporate America, finance, the Deep State and the media have been doing extraordinarily well during the past eight years of stock market bubble (oops, I mean boom) and “recovery,” and so they report that the economy is doing splendidly because they’ve done splendidly.

By recklessly creating money out of thin air and pumping it into the financial markets, the Federal Reserve has greatly enriched the elite, but they have also dramatically increased the gap between the very wealthy and the rest of us. Since he has been in the White House during this time, Barack Obama has gotten the credit for this temporary stock market bubble, and most of the elite love Obama anyway.

But in the process the stage has been set for the greatest economic and financial implosion in U.S. history, and the pain that is coming is going to affect every man, woman and child in this country.

During the debate, Trump and Clinton will talk a lot about tinkering with tax rates and regulations, but those measures are essentially going to be meaningless when compared to the massive economic tsunami that is coming. The next president is going to inherit the biggest economic problems that this nation has ever faced, and it is going to take a miracle of Biblical proportions to turn the U.S. economy in the right direction.