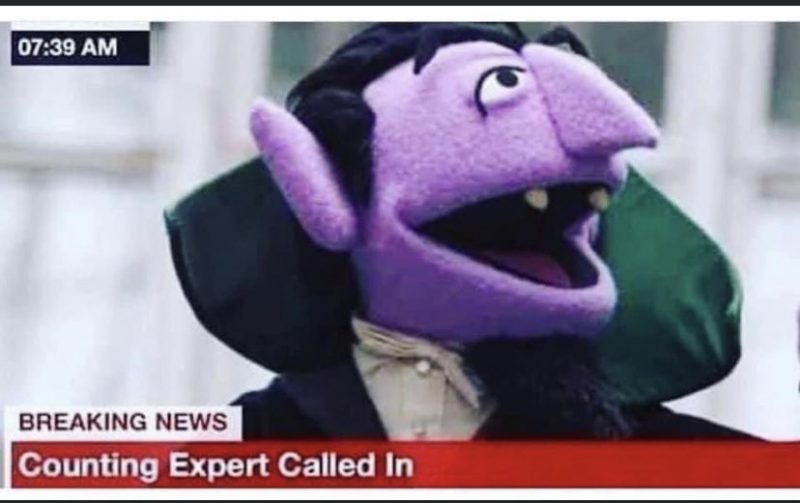 The economic downturn that we are currently experiencing is making the last recession look like a Sunday picnic.  Yes, 2008 and 2009 were bad, but they weren’t anything like this.  Unprecedented intervention by the Federal Reserve has allowed the rich to get even richer during this crisis, but meanwhile millions upon millions of ordinary Americans are deeply suffering.  Unfortunately, what we have gone through so far is just the beginning.

As a child, I was a big fan of Sesame Street, and one of the characters that really stood out to me was Count von Count.  I loved the fact that he was always counting things, and that is what I am going to do in this article in order to illustrate how bad economic conditions have now become.

Let’s start with the number 7.  According to the Congressional Budget Office, approximately 7 million more Americans would have jobs right now if the COVID pandemic had never happened…

But in fact, what the CBO is projecting is dire: around 7 million people out of work in 2021 whom CBO thought before the pandemic would be working. That’s dire – and a call to immediate action, not calm, not wait-and-see.

Personally, I think that estimate is way too low.

So the CBO estimate appears to be off by about 3 million.

Count von Count would not be happy.

Let’s try another number.  According to Bloomberg, the number of Americans living in poverty has risen by 8 million during this crisis…

Support is rising among policy makers to address America’s child-poverty crisis, which is getting worse as the pandemic drags on.

More than 8 million Americans — including many children — fell into poverty during the second half of last year, exacerbating the racial and income inequalities that are holding back the U.S. economy.

In this case, I think that this is a reasonable estimate, but that number will inevitably keep growing in the months ahead.

One of the big reasons why it will continue to rise is because hordes of small businesses will be collapsing, and that brings us to our next number.

According to a study that was recently released by the Fed, 9 million small businesses in the U.S. say that they “won’t survive” in 2021 without more government assistance…

Three in ten small businesses — or 9 million out of the estimated 30 million in the United States — fear they won’t survive in the coming year without additional government assistance, according to a survey recently published by the Federal Reserve.

The Small Business Credit Survey, which was conducted last September and October and released last week, showcased the incredible burden the coronavirus pandemic has placed on America’s small businesses, as 88% of the businesses surveyed reported that sales had not yet returned to pre-pandemic levels.

Can you imagine what our country would look like if almost a third of all small businesses permanently disappeared?

With each passing day, more small businesses are folding, and nothing that the federal government is going to do will completely stop this trend.

Our next number is 10.  According to the U.S. Census Bureau, 10 million renters were behind on their rent payments in January, and many more people anticipated not paying rent in February…

This has created extreme financial pain for America’s landlords, and when the rent moratoriums are finally lifted we are going to see the largest tsunami of evictions in all of U.S. history by a very wide margin.

Before I wrap up this article, let me leave you with just one more number.  So far in 2021, the number of passengers at U.S. airports is down by more than 60 percent compared to 2019…

Over the past seven days, not quite 707,000 passengers per day on average passed TSA checkpoints at US airports, a measure of how many passengers in the US are flying somewhere. This was down by 61.6% from the same period in 2019, the last full year of the Good Times. At the end of January, the drop from 2019 was over 65%.

I honestly do not know how the airline industry is going to survive this without government help.

Speaking of not surviving, Democrats have introduced a bill in Congress that would essentially deal a death blow to the gig economy…

The legislation at the core of their agenda is the PRO Act, which Democrats just re-introduced with sponsors including Speaker of the House Nancy Pelosi and Senate Majority leader Chuck Schumer. Among many other things, the bill would severely restrict the legal definition of independent contractors in a way that would largely end the gig economy as we know it.

The legislators’ stated intention is to protect workers and bolster their rights under law. Through the reclassification of independent contractors, Democrats hope to force gig economy companies to hire workers as full employees and thus provide them the accompanying salaries and benefits.

If this bill passes, it would absolutely devastate Uber, Lyft and countless other companies that rely on gig workers.

Basically, millions of jobs would go “poof” with one stroke of Joe Biden’s pen.

According to the Bureau of Labor Statistics, more than 50 million Americans are currently employed by the gig economy.  It is great to want those workers to have higher pay and more benefits, but if those companies go out of existence there won’t be any jobs at all.

These are very dark times for the U.S. economy, and the outlook for the future is exceedingly bleak.

However, in the short-term economic conditions should stabilize somewhat thanks to the huge stimulus payments that the government will be sending out.

But that bubble of hope will be very brief, and everyone should be able to see that much more pain is on the horizon.