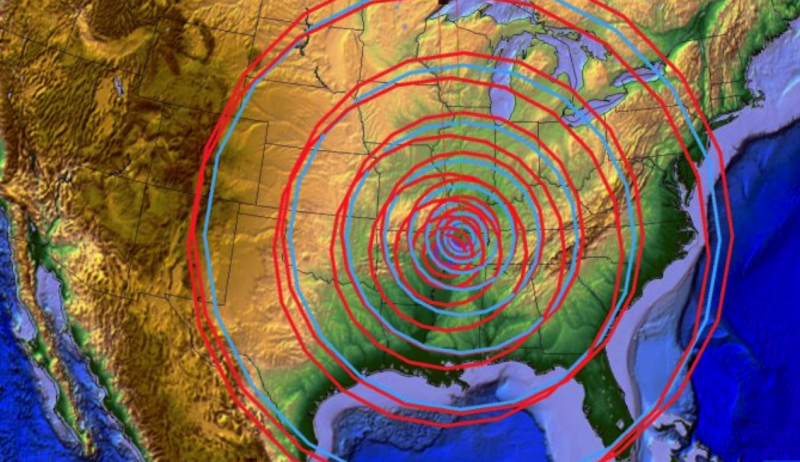 God keeps sending us warnings, but most of the population does not want to listen.  Earlier today, I learned about a stunning experience that Chris Reed just had, and I knew that I had to share it with all of you.  By the end of this article, I think that you will understand why.  So many of the things that he was just specifically shown are things that I have been warning about for years.  And I believe that many of the things which he saw will soon come to pass.

Chris Reed was not always a famous pastor, but now he has become famous as he takes the mantle of leadership from Rick Joyner at MorningStar Ministries.  There appears to be a strong prophetic anointing on his life, and this most recent experience that he had really got my attention.

On the morning of March 25th, Reed had a very vivid dream.  In this dream, he was looking at a man that he did not know that was dressed in a black suit.

The man was holding a 50 dollar bill, and Reed says that “he tore the $50 bill up in three different stages”.

To me, the 50 dollar bill could represent the 50 U.S. states, so I found that to be very interesting.

After each of the three stages, various people came up to Reed and handed him headlines about the future of America.  Of course others have had similar experiences in the past.  While he was still alive, John Paul Jackson would have experiences in which he was shown headlines about the future of our country, and many of those have already come to pass.  The headlines that Reed was given are perfectly consistent with what many other men and women of God have been shown about America’s future, and I would like to go through each one of them and share my thoughts.

The first headline that Reed was given had to do with the U.S. dollar…

The first headline read this: “The Dollar Drops 30% in Value.” A subtitle to the headline was: “Middle East Oil (countries) Strikes Deal with China Instead of the U.S.”

This hasn’t happened yet, but without a doubt the U.S. dollar is in serious trouble.  Last month, I wrote an article about why the “petrodollar” could be on the way out.  The Chinese would like to use their own currency to pay for the oil that they purchase from Saudi Arabia, and the Saudis are apparently very open to what China is proposing.  If the monopoly of the “petrodollar” is broken, that could definitely send the value of the U.S. dollar plunging.

I was then given another headline, which read: “The Perfect Storm: Inflation Reaches a New High.”

Month after month, the inflation rate in the U.S. has been hitting new highs, so there isn’t anything too revolutionary there.

But I did find it quite noteworthy that “the perfect storm” was used in this headline.  More than a decade ago, John Paul Jackson used that phrase to describe a period of unprecedented chaos that was coming to America, and I believe that we have now entered that time.

Then, another person came up to me and handed me a news headline, “Food Shortage Crisis as Wheat and Bread Imports Are at a Stalemate.”

I have been writing about the rapidly growing global food crisis more than anything else lately.

For example, please see my recent article entitled “20 Facts About The Emerging Global Food Shortage That Should Chill You To The Core”.

There are widespread shortages of food all over the world right now, and things will get much worse in the months ahead.

Another headline was then handed to me, which said something like: “Riots and Civil Unrest as Citizens Demand Entitlement Checks.” This was the only headline where I couldn’t remember the exact wording of. What I shared was close to it.

There has been lots of rioting in the United States in recent years, but the sort of riots that Reed is describing have not happened yet.

But as our economic problems greatly escalate, I believe that such riots are not too far away.

The fifth headline just about floored me.  As you read it, I think that you will see why…

Then the dream focused again on the man in the black suit. This time, he tore the $50 bill in half. When he did this, an earthquake happened under my feet.

I don’t know if Reed realizes this, but others have been seeing the exact same thing for decades.

In fact, chapter 5 in my book entitled “Lost Prophecies Of The Future Of America” is all about a gigantic New Madrid earthquake that physically rips the United States in half following the division of the land of Israel.

God has shown countless men and women of God that such a disaster will happen, and now Reed is yet another confirming voice.

To me, it seems like the sixth and seventh headlines probably go together…

Another person walks up to me and hands me another headline, “America in Pieces: More States Secede from the Nation in Retaliation to the Federal Government.”

I was then handed another headline, which said, ‘US Military Takes Charge as Uncertainty Looms Over the Federal Government.’

We certainly aren’t at such a point yet, but without a doubt animosity between the left and the right continues to rise.

Will things get so bad that some states eventually want to try to secede from the Union?

It appears that this is what Reed’s dream could be suggesting.

Then the man in the black suit took out a new dollar bill. It was a $1 US bill. What was interesting about it was that the $1 bill looked like a cell phone. I did see George Washington’s face on it, but it looked very different than a normal $1 bill. I remember looking at it, and just studying it, and I was kind of pondering why this $1 bill looked like a cell phone.

Another person came up and handed me a headline, and the newspaper headline read, “New Currency for a Renewed Nation.”

Another headline was handed to me, and it said, “Simplicity Restored as Americans Grow Their Own Food.” Then I woke up.

As the economy crumbles, will the federal government attempt to institute a brand new currency?

And will this new currency be a digital currency?

The U.S. dollar is certainly going to be heading for big trouble, and so perhaps a new currency is introduced in a desperate attempt to restore order.

Reed seems to think that the phrase “a renewed nation” indicates that America will eventually be “renewed”.

But I think another explanation is probably more likely.  A news outlet such as CNN or the New York Times may run a positive headline like that to put a positive spin on things, but in reality the introduction of a new currency will be an act of complete and utter desperation by the federal government.

Anyway, that is how I see it.

In any event, it seems clear that Reed was shown a period of unprecedented chaos in this country.

And as I have carefully documented, countless others have been shown the exact same thing.

We have been waiting for “the perfect storm” for quite some time, and now I believe that it has begun.

Unfortunately, even most Christians still don’t understand what is coming, and so most will be absolutely blind-sided by the nightmares that are rapidly approaching.