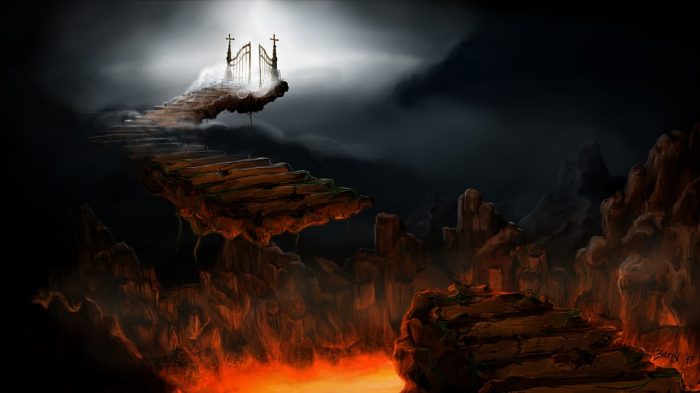 There really are people that have experienced what is on the other side of death, and some of them have actually had personal encounters with the Lord Jesus Christ.  In the legal world, eyewitness testimony is one of the most powerful forms of evidence, and over the years I have spent a good deal of time researching eyewitnesses from all over the planet that have literally been to heaven and have come back to tell us about it.  But until this week, I had never come across Steven Musick’s amazing story before.

While serving in the U.S. Navy, Musick had an extremely negative reaction to a swine flu vaccine that he was given.  He was very ill for months afterward, and it was ultimately decided that he should be given an antidote for the vaccine.  He had an even worse reaction to the antidote, and he went into a coma for five weeks.

During that period of time, he actually died and went to heaven at one point.  While in heaven, Musick says that he had the opportunity to walk arm-in-arm with Jesus…

He also described all of his memories of the sights he recalls from heaven, saying he was in an outdoors or agrarian environment that included a large oak tree, a massive wheat field, rolling hills and mountains. Musick said it all collectively offered up a “wonderful view” filled with “brilliant” scenes, adding that it was “like HD on steroids.”

But it was Musick’s purported interaction with Jesus that might capture the most attention, as he said the two walked arm-in-arm and engaged in conversation.

“Jesus was in his early 30s, long flowing brunette hair, hazel eyes, dark complexion,” he said. “He’s not overly large, but he’s massively built. You would think that he’s a weightlifter, a body builder.”

Jesus told Musick that he couldn’t stay in heaven, and that is when he was sent back.  He has documented his experiences in a new book entitled “Life After Heaven: How My Time in Heaven Can Transform Your Life on Earth”, and he is hoping that what he has to share about heaven will encourage people to live better during the time that they still have here.

Of course there are so many others that have experienced the reality of life after death as well.  One of my favorites is the testimony of Tamara Laroux.  She screamed out for God to forgive her during an ill-fated suicide attempt, and she will never forget what happened to her next…

I began screaming out to God, “God, forgive me.” The gun went off. My lungs began to fill up with blood. I began to go deaf. My eyes were open, and I became blinded. I knew that death was gripping my soul. Then all of a sudden I felt my soul leave my body. I instantly began falling and falling.

At that moment I knew I was no longer in control of my destiny. I ended up in a place that was complete torment. My body was burning. I no longer was lonely. I was no longer depressed. I became depression. I became loneliness. I became a tormented being of fear. I saw all of these other people and everybody was screaming out in pain. The mutual thing that everyone shared there was their desire to scream out to everybody on earth, “Do not come here. Acknowledge that life is about Jesus Christ.”

Fortunately for Tamara, she was not left there.  Before coming back to life, the Lord also allowed her to experience heaven…

I saw the hand of God literally come down. I knew that He was coming for me. His hand picked me up, and instantaneously I was no longer a being of tormented sin. I now was being cleansed. God took me over the Heavens.

It was beyond peaceful and gorgeous and magnificent. However, I was not allowed to stay, and I was certainly not allowed to see anything specific. But I was able to feel His presence in His entirety, perfect serenity, joy for the first time, complete, whole joy. This hand just began to bring me back into the universe. I saw myself coming back to my home. I went through the ceiling and the hand placed me gently back into my physical body. He went up and I opened my eyes.

But supernatural encounters such as these are not just happening in the western world.  In fact, countless numbers of Muslims have personally interacted with Jesus in dreams and visions all over the Middle East, and this has resulted in multitudes turning away from Islam and embracing Christianity.

And God is reaching people in supernatural ways even in the remotest parts of the globe.

When two young missionaries sought to reach the primitive Kwaio people of the Solomon Islands, they knew that they were going to be in for a challenge.  They learned the Kwaio language, and they were very determined, but if God would not have shown up probably nothing would have happened.

The breakthrough came when they got to pray for the chief of the tribe who was very sick.  The chief actually died from his illness, but when he came back to life he had an extraordinary message to share…

“Let the elders gather,” he said to his startled hearers, “and let someone go and find the boys who came earlier to tell me about Jesus.”

When they gathered, the chief related an amazing story about seeing heaven. “A being dressed in glorious white had taken him a great distance to the most beautiful place he had ever seen,” Eastman recounted.

“A person called Jesus Christ, the Son of God the young men had told him about, was being worshiped by a huge crowd of people. The glorious being explained to him that this beautiful place was where people who believed in Jesus would go for all eternity to worship Him. So everything the boys said was true.”

Needless to say, this had a dramatic impact on the tribe.  As a result of his testimony, villagers all over the region began surrendering their lives to Jesus…

“Every person, including Chief Haribo’s immediate family of 21 members, received Christ as their Savior. And soon more than 300 villagers throughout the area (in 10 nearby villages) had surrendered their lives to Christ.”

Just like that tribal chief discovered, everything that the Bible has to say about life after death is true.

When you die, that is not the end.  The Bible tells us that we can live forever, but eternal life is only available through Jesus Christ.  He paid the price for our sins on the cross so that we might live, and now it is up to each one of us to decide if we are going to accept that free gift or not.  If you have not invited Jesus Christ into your life yet, I would very much encourage you to do that as soon as possible.  As others have found out, life is very short, and you never know when it will come to a very sudden end.