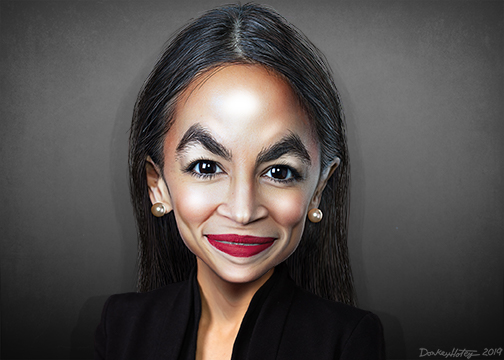 Alexandria Ocasio-Cortez continues to come up with new ways to bankrupt America, but meanwhile we have now learned that her mother actually moved out of New York because the taxes were too high. When AOC’s father Sergio died, things got very tough financially for the family, and at one point Blanca Ocasio-Cortez was unable to pay the mortgage on the family home for an entire year. But ultimately she was able to come to an agreement with the bank, and she ended up moving to Florida where taxes and the cost of living are much lower…

‘I was cleaning houses in the morning and working as a secretary at a hospital in the afternoon. I was working from 6am until 11pm. And I prayed and prayed, and things worked out. After the children graduated from college, I figured it was time for me to move to Florida.’

And of course it greatly helps that there is no state income tax in Florida, while New York has the highest tax burden in the entire country by a wide margin.

Things are particularly oppressive in New York City. On top of federal taxes, state taxes, exceedingly high property taxes and a whole bunch of other taxes, the city itself also imposes an income tax on those residing there.

By the time it is all said and done, some New Yorkers end up handing over close to 50 percent of their incomes to various government entities once all forms of taxation are taken into consideration.

This is the socialist environment that has given us Alexandria Ocasio-Cortez.

And it isn’t as if the money is being used well. In fact, it has just been revealed that Mayor Bill de Blasio’s wife was handed $900,000,000 for a mental health program, and nobody seems to know what happened to the money…

New York City Mayor Bill de Blasio’s wife, Chirlane McCray, was given $900 million to start a mental health initiative focusing on helping the homeless in the city. Four years later, no one seems to know what that money was actually used for, according to the New York Post.

The City Council discovered this shocking amount of potential waste during a meeting Wednesday. And while it sounds good to spend heavily on a mental health initiative, it appears that nobody has noticed any real benefits from that investment.

Perhaps NYC would have been better off spending that money bolstering their police.

New York City is a total mess, and now AOC wants to make the entire nation just like it.

But AOC is far more ambitious than your typical tax and spend liberal. She wants to take government spending to crazy new levels that nobody has ever seen before.

The sweeping “Green New Deal” proposed by Rep. Alexandria Ocasio-Cortez, D-N.Y., could cost as much as $93 trillion, or approximately $600,000 per household, according to a new study co-authored by the former director of the nonpartisan Congressional Budget Office.

The sobering and staggering cost estimate came as Democratic presidential hopeful Kamala Harris pointedly declined in an interview broadcast Sunday to put a price tag on the Green New Deal and “Medicare-for-all,” saying “it’s not about a cost,” but rather return on investment. The Green New Deal’s botched rollout included the release of an official document by Ocasio-Cortez’s office that promised economic security even for those “unwilling to work,” and called for the elimination of “farting cows” and air travel.

It is easy to attack AOC, because she is the perfect member of Congress for the “idiocracy” that America has become.

She literally doesn’t know what she is talking about on just about any issue that you could possibly name, but the people of her district decided to send her to Washington anyway. And the frightening thing is that there are quite a few other new members of Congress that are even worse than her.

But as bad as AOC is, I have to give her credit for one thing.

At least she is willing to stand up and fight for what she believes.

If you regularly follow my work, you already know that I can’t stand the “seat fillers” in Washington that are interested in little more than protecting their political careers at all costs. They never make any waves, they never fight for anything important, and they spend most of their time raising money for the next campaign.

Because if you do stick your neck out in Washington, very powerful people will likely bring the hammer down on you, and that is something that AOC is finding out right now…

Two political action committees founded by Rep. Alexandria Ocasio-Cortez’s top aide funneled over $1 million in political donations into two of his own private companies, according to a complaint filed with the Federal Election Commission on Monday.

The cash transfers from the PACs — overseen by Saikat Chakrabarti, the freshman socialist Democrat’s chief of staff — run counter to her pledges to increase transparency and reduce the influence of “dark money” in politics.

Chakrabarti’s companies appear to have been set up for the sole purpose of obscuring how the political donations were used.

Of course the truth is that just about every member of Congress is deeply corrupt and should be kicked out of office.

But until the American people wake up and decide to take their government back, this is what we are stuck with, and that is a very depressing reality.