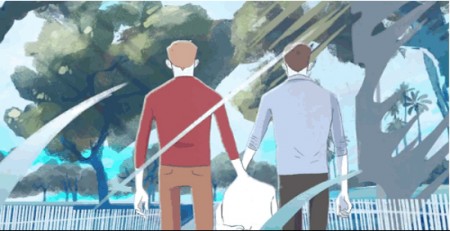 Allstate Insurance is following in the footsteps of Honey Maid and Hotwire with a poignant, gay-inclusive new ad campaign.

The “Safe In My Hands” commercial was released as part of Allstate’s 2014 #OutHoldingHands Pride Month effort and features a soundtrack by singer-songwriter Eli Lieb. Unlike other gay-themed ads, however, “Safe In My Hands” uses a unique metaphor as a stand-in for homosexuality: the ad’s animated protagonist has an oversized hand which causes him to be ostracized from his peers while riding public transit and on the sports field.