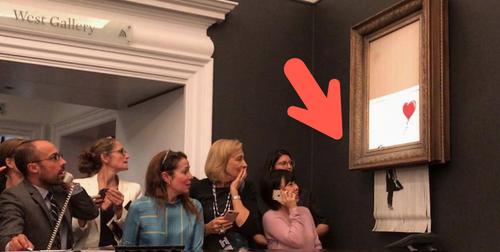 Only Banksy would do this. Moments after his famous painting entitled “Girl With Balloon” was auctioned off by Sotheby’s in London for more than a million dollars, an alarm went off and the painting self-destructed in front of a stunned audience of onlookers. Banksy had installed a shredder into the frame in case the painting was ever auctioned, and he was present at the auction to activate the shredder after the piece sold. But in the process, he may have just revealed his most closely guarded secret. He has kept his identity carefully hidden from the public for many years, but now it appears that the cat is out of the bag.

Let’s take this one step at a time. The following is how the Sun described what happened at Sotheby’s on Friday night…

Girl With Balloon, one of Banksy’s most widely recognised works, stunned the crowd at Sotheby’s in London on Friday night when it appeared to self-destruct.

The framed, stencil spray painting shows a girl reaching towards a heart-shaped balloon and had been the final piece sold, equalling Banksy’s previous auction record of £1.04 million.

However, in a twist to be expected from street art’s most subversive character, the canvas suddenly passed through a shredder installed in the frame.

A lot of people thought that the painting would be worthless after being shredded, but art experts are now telling us that the painting has probably doubled in value because of all the media attention that this stunt is receiving.

And on Saturday, Banksy confirmed that he was the one that built the shredder into the painting…

Banksy posted a video Saturday on his Instagram page accompanied by a quote attributed to Pablo Picasso — “the urge to destroy is also a creative urge” — showing the stunt unfolding and how he pulled it off.

“A few years ago I secretly built a shredder into a painting, in case it was ever put up for auction,” read captions displayed over footage of a man crafting the device into a faux-gilt frame.

Banksy is being universally showered with praise for pulling off this unprecedented stunt, but in the process he may have revealed his identity once and for all.

Earlier on Saturday, Banksy revealed that he was there when he posted a photo that he had taken of the incident to Instagram. And there are reports that “a man dressed in black sunglasses” was “scuffling with security guards” just after the incident happened…

Earlier Saturday, Banksy had posted a photo of the shredded work with a caption, imitating an auctioneer, that read: “going, going, gone”.

The post, and reports of a man dressed in black sunglasses and a hat scuffling with security guards near the entrance to Sotheby’s shortly after the incident, led to speculation the artist was present to trigger it.

Well, it turns out that lots of other guests also pulled out their phones and started capturing video and images of the incident once the shredding happened.

And in several of the videos, “a man dressed in black sunglasses” can be seen taking photos of the shredded painting. For example, you can view one of the videos right here…

So who is that man?

The man who is believed to be the person who shot the video that Banksy uploaded bears a strong resemblance to Robin Gunningham who has previously been named as the elusive artist.

Robin Gunningham was an early candidate to be “revealed” as the man behind Banksy in 2008. Years later researchers at Queen Mary University of London used “geographic profiling” to match the locations of Banksy paintings to a pub, playing fields and residential addresses with links to Gunningham. Representatives for the artist have denied the theory.

So I think that we finally have confirmation.

Robin Gunningham is Banksy, and he should just come forward and admit that fact publicly.

But of course if he does so, he will instantly lose much of his mystique.

Banksy is the most famous “street artist” in the world, and much of his appeal comes from the fact that he has been able to maintain his anonymity.

And what he has been able to pull off over the years is extremely impressive. For instance, in 2015 he created an entire theme park that he entitled “Dismaland”…

Friday’s self-destruction was the latest in a long history of anti-establishment statements by the street artist.

Other recent works included the opening of Dismaland, his dystopian, Disneyland-esque theme park in 2015, which he described as a “family theme park unsuitable for children”.

But it was probably inevitable that we would eventually discover his identity.

Just because we now know that Robin Gunningham is Banksy, that doesn’t mean that he should stop creating art.

Instead, it will mean that his career has simply entered a new chapter, and hopefully it will be the greatest chapter of all.