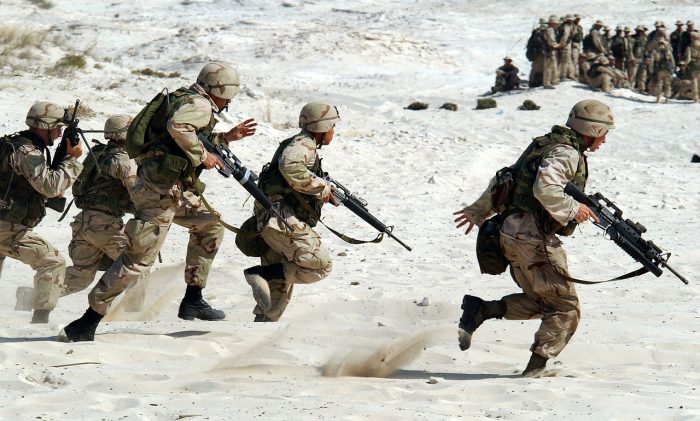 The National Defense Strategy Commission consists of former top Republican and Democratic officials that were selected by Congress, and they have just issued a major report which is absolutely stunning. At one time, the military dominance of the United States was unquestioned, but in recent years Russia and China have been working feverishly to close that gap. Both nations have been rapidly developing extremely advanced new weapons systems, and the substantial advantage that the U.S. once enjoyed has been evaporating very quickly. At this point, things have shifted so dramatically that this new report says that the United States could actually “lose a war against China or Russia”…

The United States has lost its military edge to a dangerous degree and could potentially lose a war against China or Russia, according to a report released Wednesday by a bipartisan commission that Congress created to evaluate the Trump administration’s defense strategy.

I don’t think that I have ever heard of any report ever using such language before.

This is a shocking admission, because once upon a time it would have been unthinkable to suggest that the U.S. could lose a war to anyone.

And the report also says that the U.S. would be in really serious trouble if it was forced to fight Russia and China simultaneously…

“The U.S. military could suffer unacceptably high casualties and loss of major capital assets in its next conflict. It might struggle to win, or perhaps lose, a war against China or Russia,” the report said. “The United States is particularly at risk of being overwhelmed should its military be forced to fight on two or more fronts simultaneously.”

In future wars, new types of weapons will be used that we have never seen in action before.

For example, Russia and China have both been preparing to hit the U.S. with nuclear electromagnetic pulse attacks…

China, Russia, North Korea, and Iran are preparing nuclear electronic pulse attacks from space in a future conflict to cripple the U.S. military and plunge the United States into darkness, according to a declassified study.

“The United States critical national infrastructure faces a present and continuing existential threat from combined-arms warfare, including cyber and manmade electromagnetic pulse (EMP) attack, and natural EMP from a solar superstorm,” says a recently published report from the congressional Commission to Assess the Threat to the United States from Electromagnetic Pulse (EMP) Attack.

If an enemy was able to use such a weapon to wipe out our electronic infrastructure during a surprise first strike, they would very much have the upper hand on us.

And at this point, we have zero defense against electromagnetic pulse weapons.

Russia and China have been developing many other extremely advanced weapons systems as well. For much more on this, please see my previous article entitled “Russia And China Are Developing Impressive New Weapons Systems As They Prepare For War Against The United States”.

The U.S. could have been focusing on developing the next generation of weapons as well, but instead we have been spending trillions of dollars on overseas wars.

If you can believe it, one new study has actually discovered that the U.S. has spent 5.9 trillion dollars on wars in the Middle East since 2001…

The U.S. wars and military action in Afghanistan, Iraq, Syria and Pakistan have cost American taxpayers $5.9 trillion since they began in 2001, according to a new study.

That total is almost $2 trillion more than all federal government spending during the recently completed 2017-18 fiscal year.

Just imagine what else we could have done with 5.9 trillion dollars.

Before I close this article, I want to make one other point.

Back during the Cold War, the U.S. and their NATO allies were clearly the “good guys” defending liberty and freedom against the atheist communists in the Soviet Union.

But since that time things have completely shifted around. Today, the Russian government and the Russian military openly embrace Christianity.

In fact, the Russians are getting ready to build a giant “Church of the Armed Forces” that will feature “texts from the Bible” all over the interior…

Construction on the Main Church of the Armed Forces, which will be decorated with paintings depicting historical battles, is due to begin imminently. And the man behind the project, Colonel General Andrei Kartapolov, insists the new place of worship will bolster the spiritual values of its armed forces. Kartapolov serves as deputy defence minister and the head of the armed forces’ Main Military-Political Directorate – a new organisation tasked with political education of troops, The National Interest reports.

The military church will be pained khaki green in “the colour of the standard Russian missile system and armoured vehicle”, according to Russian media.

Meanwhile, the interior will feature texts from the Bible alongside “paintings with battle scenes from military history”.

Meanwhile, all traces of the Christian faith have been systematically eliminated from the U.S. military, and if a military officer dares to talk about his Christian faith with someone under his command that is enough to set off a string of lawsuits.

So are we still really the “good guys”?

That is just something to think about…