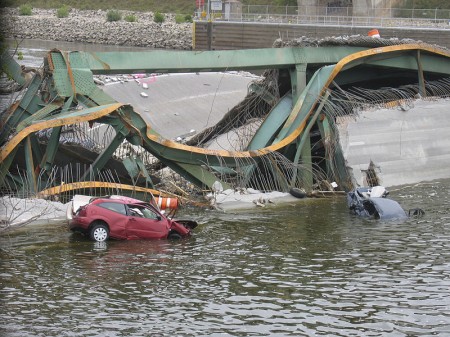 A recent headline in the mainstream media caught my attention due to its dramatic nature. It spoke of “bridges crumbling” in the United States (along with its highways rotting). The media drone then attempted to explain why these bridges/highways were being allowed to crumble, despite borrowing rates which are “the lowest since 1969”.

The explanation given was totally false: that (supposedly) U.S. state and local governments were “repaying obligations by the most on record”. This is propaganda nonsense, since what it directly implies is that state and local governments would have to be recording the largest budget-surpluses on record. Mathematically, this is the only possible way to retire debt by a corresponding amount. Those surpluses do not exist.

In fact, what the Liar from the mainstream media was really pointing out is that state/local governments are making the largest interest payments on record, the result of the “unprecedented deficits” acknowledged within this piece of mainstream propaganda. This allows us to provide the real answer to the question: why are “bridges crumbling”, in the U.S. (and across the rotting West) despite the lowest borrowing-rates in 45 years?

The answer to the question is simple arithmetic. Our bridges, our highways, indeed, our entire economies and societies are falling apart because governments (at all levels) are drowning in debt. When governments (at all levels) are making the largest interest payments on record (but never paying-off any principal) it means less dollars left over for spending on useful/necessary services, and infrastructure investment/maintenance.