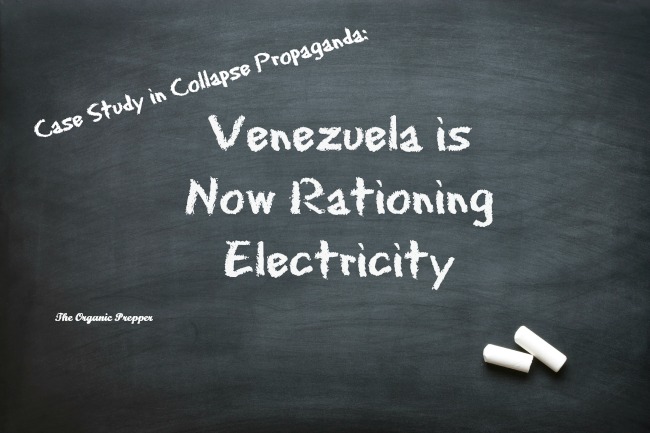 For the past year, the government has been trying to sugar coat the economic demise of the country

, and they’re continuing the propaganda with the new electricity rationing program that they’ve instituted. If you think it’s because of the socialist government’s financial collapse, you’re being ridiculous. It’s because they care about climate change. Vice President Jorge Arreaza said so.

“This is, of course, linked to global warming and the excessive industrialization of capitalism, which never stops, nor has ever stopped, for the effects that it can have on the climate, on society and on Mother Earth.”

Of course it is. Only silly paranoid conspiracy theorists would say otherwise.

In case you’ve forgotten, there’s also no food shortage and there’s plenty of freedom, too.

The government of Venezuela passed laws disallowing the storage of food because it’s just silly to do that. The rationing of the food available in the country, using a fingerprint registry is just there to keep people in line with the law. And even though store shelves were virtually bare of basic necessities like toilet paper, laundry soap, and food in January, with long lines of people waiting for the few  items available, it must just be where those folks were shopping.

Repeat after me: THERE ARE NO SHORTAGES.

Now, back to electricity. A report on Breitbart.com said:

The Venezuelan government will begin rationing electrical supplies this week in response to high demand triggered by heat. Public employees will only have to work six hours a day until further notice, and police units will be sent to inspect private businesses to ensure they only use their allotted amounts. Venezuelan Vice President Jorge Arreaza blamed the measures on climate change.

Minister of Energy Jesse Chacón added that the limited hours on public sector jobs would not apply to necessary arms of the government, such as education, health, security, and garbage collection. Private industries are obligated to use 10% less energy across the board until further notice, without any exceptions mentioned in the original announcement. The new regulation permits government inspection of businesses specifically to monitor energy use, though the government has not specified what punishments await a business that defies the call.

See? I told you. They just love the planet. That’s all.

Here’s why we need to pay attention to the rationing in Venezuela.

Now, if you’re reading this and thinking that what happens in Venezuela is of no concern to you, I beg you to reconsider. No, the economic situation in a South American socialist country won’t directly cause the US economy to collapse. What it does is provide a modern day glimpse into what an economic collapse really looks like, much like the collapse of Greece was a cautionary tale. These are both direct case studies of what happens to the middle class during an economic collapse.

These mandated power rations, the limited amounts of food, the government-funded snitches, the tracking, and most of all, the propaganda, are all what await us in an economic collapse situation. While the Venezuelan government will be facing no limits on their use of electrical power, the people will only be allowed allotted amounts.

Do you think it can’t happen here?  Consider the forced rationing of water amidst the drought in California. Rationing that only applies to regular folks, not wealthy people or massive corporations.

It’s obvious that the state really is in the midst of an epic drought. But conservation mandates are not applied equally, much like the electricity rationing in Venezuela.

Golf courses for the rich and famous remain lush and green, while wells across the state run dry. Ordinary people aren’t allowed to have lawns or to even have vegetable gardens, and newspapers are calling upon “good Samaritans” to snitch if they feel someone is wasting water. There’s even an app for that, and Smart Meters are in place to target wasters (Unless they happen to be wealthy corporations, of course. They have different rules and snitching on them will do no good.)

One small community, Outingdale, just received word that strict rationing is now in effect. Residents will be allowed only 50 gallons per day, per person, and no outside watering of any kind will be permitted. This is not good news for folks who rely on their vegetable gardens for food. Meanwhile, the Nestle corporation is busy pumping out the state’s remaining water, bottling it, and selling it back to people for an enormous profit.

Anyway, back to electricity.

I’m reminded of the series, The Hunger Games

, in which residents of the outlying districts are only allowed power when the Capitol deems they should have it, such as when they want to air propaganda “entertainment” to keep people in line.  In the movie, citizens of the Districts were relegated to cooking over open fires and lighting their rooms with candles.  No one had transportation or power.  They were not allowed to hunt to supplement their meager food allotments and in the heroine’s District, they were not allowed to use the coal the area was rich with.  Uniformed “peacekeepers” patrolled the districts to ensure that the rules were strictly adhered to and that the excruciating poverty was the standard for all residents.

With the widespread installation of mandatory Smart Meters, how difficult would it be to forcibly ration our electricity here?

They can already remotely turn off appliances they deem are using too much energy. At the press of a few keys on a central computer, our electricity usage could be  monitored to make sure we stay within the designated limits, strictly slotted to only certain hours of the day, or even cut off entirely if we exceed our rations. It may not even be direct rationing that cuts us off, as it is in Venezuela. As prices of electricity keep climbing, how extreme is it to think that one of these days, electricity might only be for rich people?

However it goes down you can be sure that no one in the government will admit to mismanagement or a desire to enhance control and dependency. It will be couched in warm, fuzzy terms of saving the planet from carbon emissions, much like the propaganda coming out of Venezuela.  It’s easy for us to see it when it happens to them, but many people here are so deeply entrenched in cognitive dissonance that they’ll swallow the green pill with a smile, moving into their Agenda 21 microhomes and martyring themselves for the good of Team Green.

So, what can we do to maintain our independence should our access to affordable necessities be rationed out like they are in Venezuela? Here are 15 ways to increase your self-reliance so that you are less affected if rationing comes to America.

It’s only by reducing your need for the things sold in stores and your reliance on services provided by corporations that you can exempt yourself from the chaos, dependency, and desperation that will erupt when an economic collapse situation occurs here.