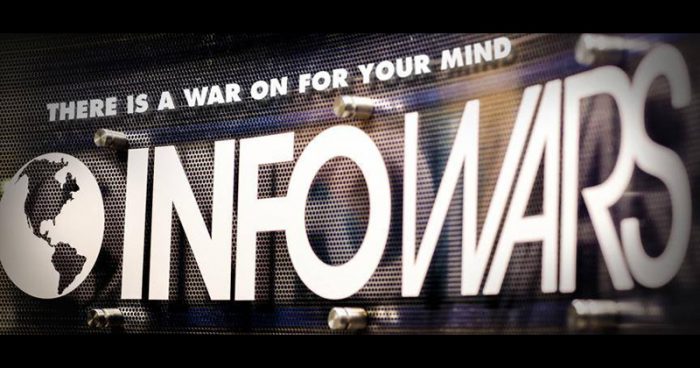 (Information Liberation) Facebook, Apple, Spotify and Google-owned YouTube all moved to ban Infowars from the internet in a coordinated attack on August 6th, 2018 — a day which will go down infamy.

In an act of blatant collusion and election interference carried out just four months before midterms, all four megacorporations banned Infowars within 12 hours of each other.

These four companies have a combined net worth of over $2 trillion and control the vast majority of all internet traffic.

The Alex Jones Channel has been permanently DELETED by YouTube.

This is a coordinated PURGE.

This is political censorship. pic.twitter.com/gyYiSSYFwI

Big Tech is engaging in election meddling and COLLUSION.

What has just happened to InfoWars is proof that Big Tech is colluding to silence opposition.

The empire strikes back: Apple, Spotify, Facebook and Google/Youtube all purge Infowars/Alex Jones. Yes, Infowars has frequent nonsense, but also a state power critique. Which publisher in the world with millions of subscribers is next to be wiped out for cultural transgression? https://t.co/XAEQWr58hw

Alex Jones has been doing the same thing every day for well over a decade, but Facebook, YouTube, and Apple all decide within hours that he suddenly violates their “community guidelines.” Sure, OK

This isn’t enforcement of terms of services, it’s election meddling.

Whether you like @RealAlexJones and Infowars or not, he is undeniably the victim today of collusion by the big tech giants. What price free speech? https://t.co/DWroGYaWvk

When CNN was lobbying to have @infowars banned from Facebook, everyone ignored it.

No matter your opinion on Info Wars, this is an attack on free speech for EVERYONE.

Alex Jones is now an unperson, straight out of the plot of George Orwell’s Nineteen Eighty-Four. Regardless what you think of him and Infowars, this is the equivalent of digital book burning and sets a horrifying precedent for mass censorship by Big Tech.