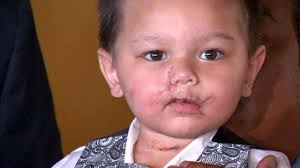 Remember back in May when a gang of uniformed thugs from the  Habersham County SWAT team threw a flash-bang grenade right on top of a sleeping baby?

Well, stellar group that they are, they’ve refused to pay the over $800,000 in medical bills for the child that they permanently disfigured and nearly killed. That’s right. They aren’t paying the bills and are leaving the family to try and cover the costs for the toddler’s care.

Our militarized police forces are claiming too many innocent victims, and they aren’t being held accountable.

The family’s attorneys, from the Davis Bozeman Law Firm in Decatur, Georgia, released a statement this morning:

The family of Bounkham “Baby Bou Bou” Phonesavanh, the child severely injured on May 28, 2014 by a flash bang grenade thrown in his play pen during a botched police raid while his family was staying in Georgia, received a copy of the notice sent to their son’s doctor’s office that Habersham County reneges on their public promise to pay for the medical expenses of this working class family’s child. “Bounkham “Baby Bou Bou” Phonesavanh has to date incurred an estimated $800,000 worth of expenses due to his injuries. Shortly after severely burning “Baby Bou Bou” with a flash bang grenade the Habersham County Sheriff’s Department vowed to pay for the child’s medical expenses.  Last week the family discovered through medical providers that the county will not pay any medical bills.  The county stated that it would be “illegal” to pay.

Recently, Alecia Phonesavanh shared her son’s injuries are so severe that doctors predict several more surgeries throughout his life to repair the hole in his chest and major facial injuries.

The Habersham County Attorney responded on behalf of the county Board of Commissioners with this vague explanation.

“The question before the board was whether it is legally permitted to pay these expenses. After consideration of this question following advice of counsel, the board of commissioners has concluded that it would be in violation of the law for it to do so.”

It’s important to remember a few things regarding this case.

1.) There is no question or denial that the SWAT team threw a grenade right on top of a sleeping baby.

2.) No drugs were found on the premises.

3.) The person they were looking for was not present at the time of the no-knock raid.

It’s bad enough that it happened.  But to cripple the family financially with nearly a million dollars in medical expenses on top of that?

This isn’t even about the shoddy police work, the bad intel, or the poor decision to throw a grenade (that was designed to be rolled) into a room full of children. Nor is it about the slimy sheriff of Habersham County, who, if you recall, defended the actions of his SWAT team.

Even though he claims they’d been staking out the house for days, they somehow had no idea that 4 children were present. (This is despite the minivan with the stick figures in the windows, the car seats, and the typical kid detritus like shoes and clothes and toys.) The raid was made based on a story by a confidential informant who claims to have bought $50 worth of meth from the nephew of the homeowner.

According to a report on RT, Sheriff Terrell…

…told the AJC the raid was properly executed, but ended in a tragic result. He defended the use of the no-knock warrant and lack of investigative work, saying that it would have risked revealing that the officers were watching the house. (source)

This is about a complete lack of accountability. A refusal to take responsibility for a horrible mistake that crosses into criminal negligence, at the very least.

What an absolutely repulsive group of individuals.

They blew a hole through the face and chest cavity of a 19 month old child, permanently disfigured him,  put him through an unfathomable amount of agony with treatments and repeated surgeries, and now, the family, which was already struggling financially after losing their home in a fire, is stuck with the bill, which will continue to climb, since Bou Bou is looking at several more operations.

“To attempt to address the ever increasing medical bills, the family is hosting a Community Fundraiser Saturday, August 23, 2014 from 3:00pm – 12:00am at the Veterans of Foreign War Center(VFW) located at 1015 Center Ave. Janesville, Wisconsin 53546.  The Phonesavanh family and community supporters are calling for church leaders, civil and human rights advocates, organizations and citizens of goodwill to support the family by donating online or  attending their fundraiser to help with the looming medical bills they are facing to continue healing their son.”

1 thought on “Cost of Medical Bills for Baby Hit by SWAT Grenade? Over $800,000. County’s Refusal to Pay? Priceless”