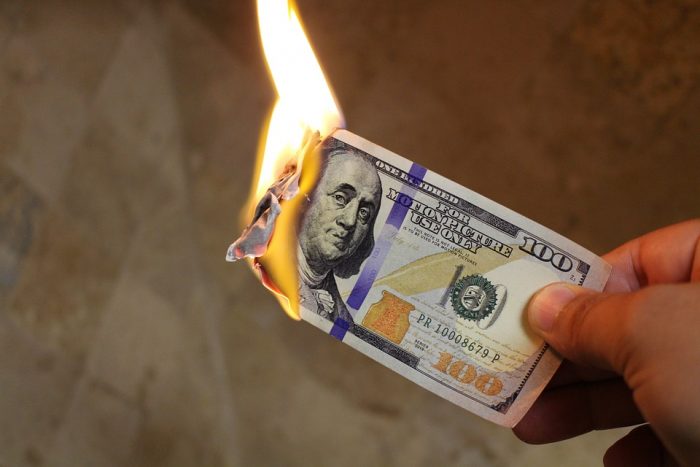 There has been a tremendous amount of talk about the spending deal that was just reached in Congress.  Most of the focus has been on who “won” and who “lost” politically, and if you have been keeping up with my articles you definitely know my opinion on the matter.  But what nobody is really talking about is that this deal actually increases spending at a time when our debt has been absolutely exploding.  We added more than a trillion dollars a year to the U.S. national debt during Obama’s eight years in the White House, and our debt binge actually accelerated toward the end of his second term.  In fact, the national debt increased by more than 1.4 trillion dollars during fiscal 2016…

Since we are already in so much debt, we might as well shoot for the moon, right?

This new spending deal increases spending in a whole bunch of different ways, but it doesn’t do anything to raise more revenue.

By the time fiscal 2017 is over, we will almost certainly have added at least another trillion dollars to the debt, and the Congressional Budget Office is projecting that an additional $10 trillion will be added to the debt over the next ten years.

These days we toss around the phrase “a trillion dollars” as if it isn’t a big deal.

But it is a big deal.

The borrower is the servant of the lender, and I would say that we are enslaving ourselves, but that is not exactly accurate because we don’t actually have any intention of ever paying any of this debt back.  Instead, we plan to just keep going into more debt for years to come.

Sadly, it will be our children and our grandchildren that will have to deal with all of this debt if our nation lasts that long.  Thomas Jefferson was entirely accurate when he described government debt as a way for one generation to steal money from another, and since the day that Barack Obama first entered the White House, the federal government has been stealing more than 100 million dollars an hour from our children and our grandchildren every single hour of every single day.

If some thieves could somehow get away with stealing 100 million dollars from someone, that would make headlines all over the globe.

But this is what we are doing to future generations of Americans every single hour of the day.

I have said it before, and I will say it again.  What we are doing to our children and our grandchildren is beyond criminal, and in a just society those that are responsible for getting us into so much debt would be going to prison.

When you are in the middle of a debt binge, it can seem like there will never be any consequences, but the truth is that a day of reckoning always arrives eventually.

One of the reasons why I get so fired up about the national debt is because it could literally destroy the bright future that our descendants were supposed to have.

If you look back over the long-term, the average rate of interest on U.S. government debt has been somewhere around 6 percent.

Of course at the moment we are nowhere near that level, but it is inevitable that interest rates will move back toward the long-term average eventually.

So let’s imagine that the average rate of interest got back to just 5 percent.  If that happened, we would be paying about a trillion dollars a year just in interest on the national debt and we would be facing national bankruptcy.

Of course the Federal Reserve would likely start printing money like mad at that point, and we would rapidly become another Venezuela or Zimbabwe.

But if it is so dangerous for governments to go into so much debt, why do they do it?

Well, for one thing most politicians don’t really care about long-term considerations.  Instead, they actually want the government to spend lots of money in the short-term, because government spending always gives a boost to short-term economic activity.

And if the economy is “doing well” in the short-term, it is more likely that the voters will be in a good mood when voting time arrives.

This is something that Barack Obama understood very well.  He inherited quite an economic mess, and so he went on the greatest government debt binge in American history.  As I explained in a previous article, if we had not borrowed and spent 9.3 trillion dollars during the time that Obama was in the White House, we would be in the worst economic depression in our history right at this moment.

Of course by going into so much debt, our long-term problems have been magnified.

It had been hoped that with the Republicans in control of the White House, the Senate and the House of Representatives that a sense of fiscal responsibility would return to Washington, but that obviously has not happened.  So now the stage is set for the kind of financial meltdown that I have been warning about for a very long time.

At one time the Republicans would at least give lip service to trying to control the debt, but now they also seem to have become convinced that our exploding national debt doesn’t really matter.

There are a few dozen members of the House and a handful of Senators that are still keeping up the fight, but they are vastly outnumbered.

Even though we were the wealthiest and most prosperous nation on the entire planet, that was never enough for us.

We always had to have more, and so we have accumulated the greatest mountain of debt in the history of the world.

There will be severe consequences for what we have done, but the warnings are being ignored, and so now all that is left is for us to reap what we have sown.