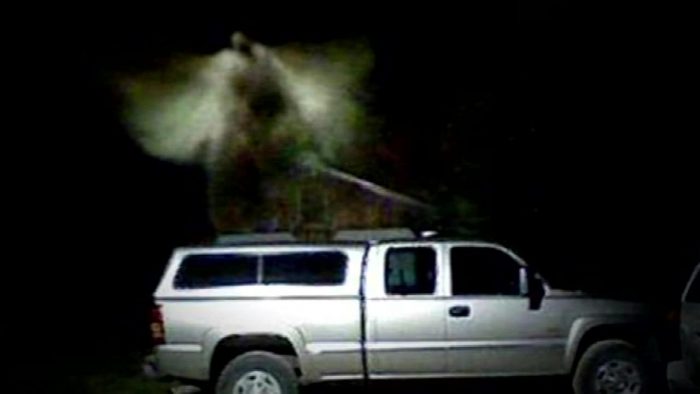 Could it be possible that the figure in this photo is exactly what it appears to be? A Michigan man named Glen Thorman is completely convinced that he captured an image of an angel with a drawn sword on a security camera outside his home in East Jordan, Michigan. So are we looking at photographic evidence that angels really exist, or is something else going on here? This photo has sparked a tremendous amount of debate on social media, and some naysayers have even accused Mr. Thorman of doctoring the image. Of course that is always possible, but why would he do that? And if the image is examined and no evidence of manipulation is found, will the skeptics be satisfied then? Sadly, some people will never be satisfied unless they have a personal encounter with an angel themselves, and even then many skeptics would still refuse to believe.

For Glen Thorman, however, the truth about what had happened was obvious from the very beginning…

A Michigan man says his security cameras picked up footage of an angel with a sword recently.

“I said, ‘That’s an angel!’ And I was just blown away, I couldn’t wait to send it to my wife and send it to [Pastor] Deneille [Moes]. And I said, ‘I got an angel, and my camera took a picture of an angel,'” Glen Thorman tells WNDU.

And his church is backing him up on this claim. This is what Jordan Rivers Church had to say about the photo on their Facebook page…

Last night at the Thorman’s house, the security camera recorded this snapshot. Glen Thorman is the fire chief for East Jordan …( they attend Jordan Rivers) Yep folks… It’s an angel. I guess there is no question who is watching over their residence while they sleep, and yes, they pray that The Angels of the Lord will surround them and their property….These photo’s have not been altered in anyway. The second photo, the security camera also shot because the angel was moving away. The camera is designed to photograph anything in motion or unusual…. lots of tears today when they opened the security on their camera …WOW!

The primary alternative theory being floated is that a moth simply flew in front of the security camera. But the church says that is not a likely explanation for a number of reasons…

“We have studied the photo from all possibilities. This ‘Being’ is behind the truck with translucent wings. We checked the temp at 12:49 am for this location. 46* was predicted in town, 39* degrees at the Thorman’s perhaps lower, but the average for his home is a 7 degrees difference in temperature. (Their home is out in the sticks which is much colder than us near Lake Charlevoix) The photograph was taken early morning on the 9th. @ 12:49… And it’s believed the ground was still cold,” the statement read, as reported by the Christian Post.

“We contemplated the piles of snow at the residence until May 3rd, (left over from the 3 1/2 + ft. snowstorm April 16-20th).and accounted for the melt down factor which took quite a few days. …And although moths have been seen in temps of 35* according to research, not a mosquito or moth has been seen yet to-date in their neck of the woods or ours, not sayin’ there ain’t any; just that we haven’t seen any yet in these parts….and tonight, we have another round of frost. So… that’s the last of the scientific research. Our conclusion remains the same… Angel,” the church said.

In the end, those that do not want to believe will always be able to come up with more excuses to justify their unbelief.

We live in a culture that constantly denigrates those that believe in spiritual things. So many Americans are afraid to embrace the supernatural because it might make them seem “anti-intellectual”. Of course that is a load of nonsense, but this false paradigm is constantly being reinforced by movies and television programs. For instance, just check out the following example from a recent episode of the Simpsons…

During the episode, Bart decorates his tree house in crucifixes to ward off spirits, even though he isn’t a Christian.

Meanwhile, the character of Millhouse, who is a Christian, gets excited when he sees it and asks, “What’s going on, Bart? Are you into God now? I always was. Look at those abs. The secret is less loaves, more fishes.”

Bart then replies, “I don’t believe in some dopey religion. This is to keep out ghosts.”

And throughout our society there is an endless effort to marginalize the Christian faith.

Once upon a time the Christian faith was the center of American society, but now young people are being banned from even mentioning the Lord Jesus Christ at graduation ceremonies…

Officials at an Illinois high school recently prohibited a valedictorian from speaking about Jesus in his graduation speech.

Student Sam Blackledge, 18, told the Todd Starnes Radio Show that he was called to the principal’s office at West Prairie High School last week where it was outlined by school and district officials that he needed to take his religious references out of his speech.

“They said they didn’t want to make it a religious ceremony,” he stated. “They told me that if I took out Christ I could say everything else.”

As a nation we have turned our backs on God, but God keeps sending us little reminders that He is very real.

Unfortunately, the United States is in a state of deep slumber at the moment, and it might take a great deal of shaking before people start waking up.