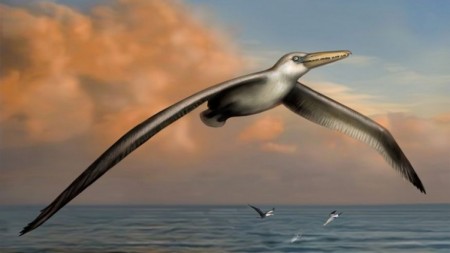 Be thankful you’ll never see this bird perched outside your window.

Researchers have uncovered the fossil of an extinct bird with a mouthful of tooth-like spikes and wings just smaller than a World War I fighter plane’s. At 20 to 24 feet from wingtip to wingtip, the new species had the biggest wingspan of any known bird, outstripping the next-biggest feathered flyer by 15% or more.

The bird “is more like a dragon out of the Game of Thrones show than anything alive today. It’s so spectacularly weird,” says paleontologist Daniel Ksepka of the Bruce Museum in Greenwich, Conn., author of a new study describing the bird.

The largest flying bird known to ever have lived has now been revealed, an extinct giant with a wingspan more than twice the size of the largest living flying bird, researchers say.

These findings exceed some predictions for the largest size possible for flying birds, scientists added.

The new species, Pelagornis sandersi, had an estimated wingspan of 20 to 24 feet when its feathers are included. This is up to more than twice as big as that of the royal albatross, the largest living flying bird, which has a wingspan of about 11.4 feet.