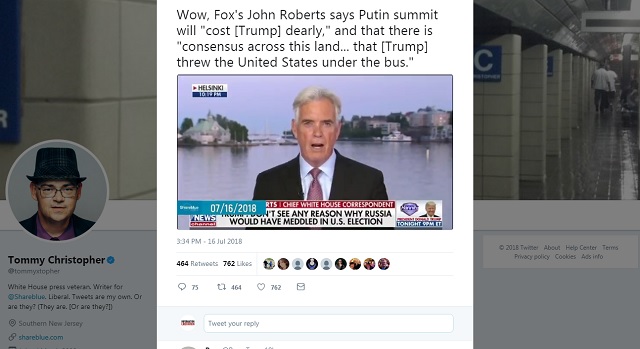 (Information Liberation) The political class had a meltdown Monday over Trump moving to make peace with Russia and end the neocons’ Cold War.

Their “consensus” was, according to Fox News’ John Roberts, that Trump “threw the United States under the bus” (…by not allowing the deep state to sabotage his peace talks with their perfectly timed phony indictment on alleged “Russkie meddling”).

Wow, Fox’s John Roberts says Putin summit will “cost [Trump] dearly,” and that there is “consensus across this land… that [Trump] threw the United States under the bus.” pic.twitter.com/d10mSefeFy

What none of these hacks will mention is every country, including and especially the US, meddles in other nations’ affairs. The US’ interference in Russia is conservatively one hundred times that of Russia’s interference in America.

Whereas Russia is accused of interfering in our affairs by exposing the crimes of the Democratic Party and Hillary Clinton, the US — and Hillary Clinton herself — interfered in Russia’s affairs to try and impose so-called “progressive” liberalism, world globalism, and undermine the Christian fabric of their nation through a LGBTQBLTBBQBYOB agenda.

President Trump on Monday drew critical reviews from media analysts and pundits across the political spectrum for his performance during a joint press conference with Russian President Vladimir Putin.

Trump did not press or condemn Putin on the allegations of Russian interference in the 2016 presidential race, just days after indictments were delivered against 12 Russian intelligence officers for their alleged role in the hacking of the Democratic National Committee.

Instead, he asserted that he did not collude with Russia in the election, recounted his victory over Democratic nominee Hillary Clinton and called special counsel Robert Mueller’s investigation “ridiculous” and a source of tension between the two countries.
Numerous analysts and reporters on CNN, which Trump has long targeted with insults and taunts, tore into Trump’s performance.

Anderson Cooper, who anchored CNN’s coverage from Helsinki, Finland, before and after the press conference, declared it “perhaps one of the most disgraceful performances by an American president at a summit in front of a Russian leader that I have ever seen.”

David Gergen, a former adviser in the Nixon, Ford, Reagan and Clinton administrations, called it “embarrassing” for Trump to bring up Hillary Clinton’s emails and the 2016 election on the international stage.

“I’ve never heard an American president talk that way, but I think it’s especially true that when he’s with someone like Putin — who is a thug, a world-class thug — that he sides with him again and again against his own country’s interests,” Gergen said.

Today’s performance will be seen by some as circumstantial evidence.

I don’t have anything quippy to tweet. I’m horrified – and have never been more proud of the fact that Putin hates my father so much he personally sanctioned him on Russia’s enemies list.

Today’s press conference in #Helsinki was one of the most disgraceful performances by an American president in memory.

What part — I called it surreal. Thanks https://t.co/YSGNGjLZXJ

Trump, finally asked whom he believes on Russia interference, gives a vague and rambling non-answer, with renewed complaints about Hillary’s server. Says he trusts US intel but made clear he takes Putin’s denials seriously. Lame response, to say the least.

Appalling moral equivalence & equivocation — rooted in an embarrassing, juvenile, insecure, consuming obsession over his own legitimacy. Easily one of his worst days as president. And again, juxtapose that performance with how he just treated our European & North American allies.

Anytime there’s a consensus among our parasite ruling class, you know it’s bad for America.