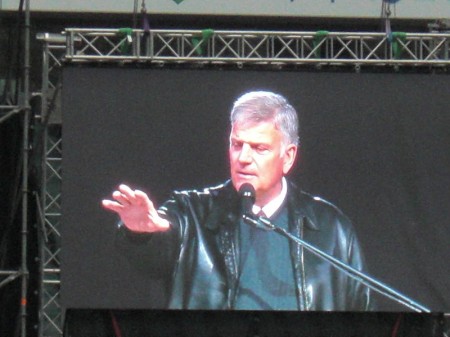 Reverend Franklin Graham, head of the Billy Graham Evangelistic Association and the international Christian aid group Samaritan’s Purse, said ISIS jihadists are crucifying and beheading Christians in Iraq and Syria–“people are dying for their faith”–and added that he has heard of “incidences where entire families have been buried alive because they refused to convert to Islam.”

Franklin Graham, son of world-renowned evangelist Billy Graham, said he was also aware of some Muslims who who were fleeing from the bloodthirsty ISIS, stressing that they do not want to see or live under the brutal sharia policies the jihadists were implementing.

Asked by Fox’s Greta Van Susteren about how quickly the situation had changed in Iraq, particularly in the north and eastern regions since December of last year, Rev. Graham said, “It’s intensifying. We are seeing now across Syria. And I will get reports out of Syria where Christians, and also in Iraq, where Christians have been crucified. They have been beheaded.”